By Manly Bryant on January 10, 2022
Advertisement 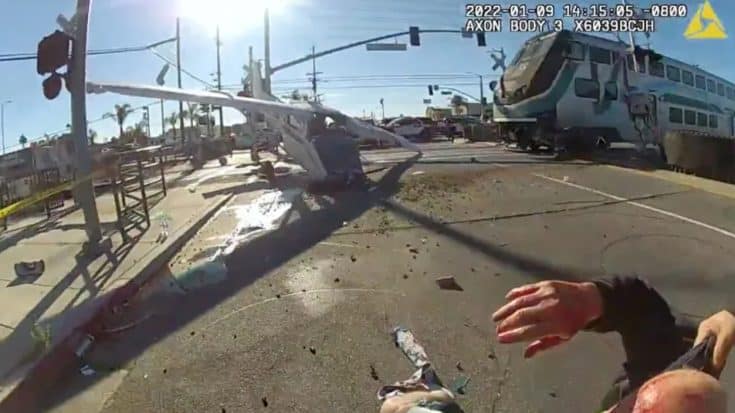 Dramatic footage recently coming out of Los Angeles, California showed the intense moment a pilot was pulled from a crashed plane on a train track seconds before the train collided with the plane.

In the video footage shot from the chest cameras on one of the police officers, it appeared the pilot was still alive, however, he was badly beaten up and bleeding.

Four officers worked together to remove the obstacles and pulled the pilot out of the plane and onto the pavement. They then began pulling him away from the tracks.

The officers literally pulled the man out of the crashed Cessna 172 plane three seconds before the train, blaring its horn, roared though at high speeds and smashed through the lightweight metal like butter.

The Federal Aviation Administration said the plane crash happened around 2:10pm on Sunday shortly after takeoff from the Whiteman Airport in the San Fernando Valley community of Pacoima.

The officer’s chest cam showed the train smashed through the plane at 2:15pm.

Fortunately, the crash site was just a few blocks from the Foothills Division station, so officers were on the scene almost immediately.

Officer Damien Castro, Officer Christopher Aboyte, Officer Robert Sherock, and Sgt. Joseph Cavestany were the four men from the station who arrived on the scene and saved the pilot.

According to MT Standard, Officer Cavestany said, “I had requested Metrolink to cease all train activity, but apparently that didn’t happen.”

The pilot was transported to the nearest hospital where it’s still unclear what his condition is. No other injures were reported during the incident and the FAA and the National Transportation Safety Board said they will conduct an investigation into the matter.

The train tracks were halted within 20 miles of the crash,  northwest of downtown Los Angeles so that clean-up crews could get in there and clean up the aftermath.

Watch Footage Of The Rescue Below