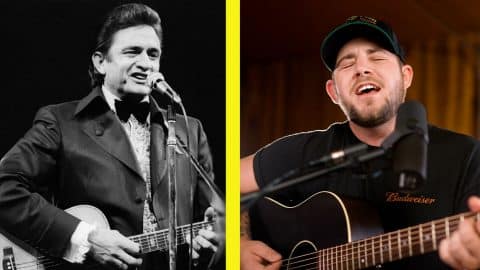 Few artists come close when doing their rendition of the legendary Johnny Cash’s hit song “Folsom Prison Blues.” The song itself is one of Cash’s most beloved and well-known songs that continues to inspire musicians today.

Being one of the most widely recognized songs, it comes as no surprise that country artist Kameron Marlowe would give it a try, and quite frankly it’s one of the best renditions we’ve ever heard.

Marlowe has been making waves in the Nashville music scene and beyond with songs like “Giving You Up,” “Sober as a Drunk,” and his latest, “Tequila Talkin’.”

His baritone voice has a slight grit to it, which immediately captures the attention of the listener – perfect for a Johnny Cash song.

During his time in the Air Force, Cash saw Crane Wilbur’s film Inside the Walls of Folsom Prison while stationed in Germany in 1953. The 90-minute long film left an impression on Cash and inspired him to write “Folsom Prison Blues” which was featured on his album At Folsom Prison.

At Folsom Prison stayed on the country music charts for 90 weeks, and in the Billboard Top 200 for 122 weeks. The album was certified Gold in the fall of 1968 and certified Triple Platinum in 2003.

Few can match Cash’s version, but Marlowe’s rendition is one worth experiencing.

Watch Marlowe’s incredible performance in the video below.