By Miranda Raye on August 16, 2021
Advertisement 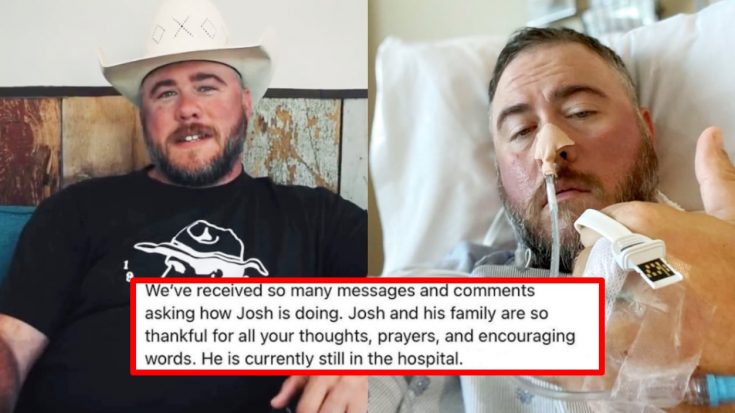 On August 8, country singer Josh Ward was involved in a horse riding accident. As shared in a post on his social media pages, Ward suffered “serious abdominal injuries and internal bleeding.”

Ward underwent surgery to stop the internal bleeding. It was a success, and he has been recovering in the hospital ever since.

Ward and his team have kept his fans updated on his recovery in the days that have passed after his accident. First, they announced he would have to cancel and reschedule nine of his shows so he can take the time he needs to fully heal:

“Thank y’all for all the kind words,” Ward said. “For more info regarding these shows, stay tuned on the venues and my social media & website for updates and rescheduled dates. Can’t wait to get back out there on the road soon.“

According to Ward’s team’s first post about his accident, he “…will require a few weeks at home to fully recover” once he is out of the hospital.

In a new update shared on August 13, Ward’s team let his fans know how he’s doing now. His team said he was still in the hospital at that time, and would be there for a few more days:

“He is currently still in the hospital,” the update read. “The surgery he underwent is a major intestinal operation, so he will require a few more days in the hospital. We all hope to see him on his way home soon.”

Ward’s team said he is working hard on regaining his strength. He’s able to make laps around the nurses’ station several times each day and has maintained a positive attitude.

“Please keep sending those prayers up, for a speedy and healthy recovery,” Ward’s team said.

Ward’s team later shared a video of him walking around the hospital with the help of a walker.

“We got a little video from JW this morning, he wanted to send y’all a thank you message,” his team said. “He apologized for the sound his Walker makes. Thank y’all for the prayers, our entire camp appreciates them.”

You can watch the video of Ward below. We’ll be praying for his quick and complete recovery!