By Jennifer Pernicano on October 18, 2018
Advertisement 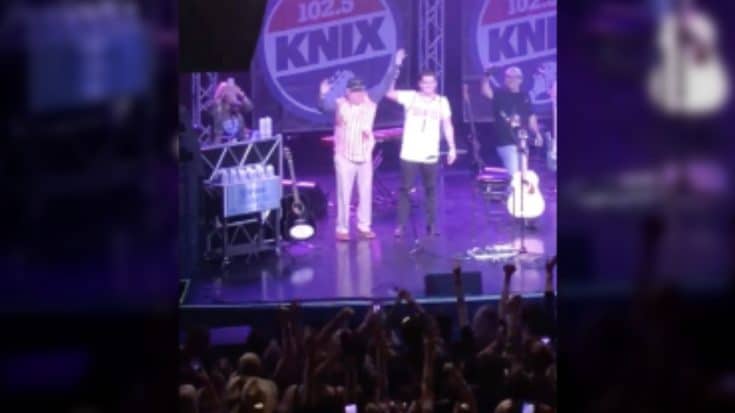 He is on track to be one of country music’s fastest rising stars, but now you might know of him because of what happened at his show on October 17, 2018.

And it had nothing to do with his music.

Austin Burke has been riding high on the success of his songs including “One Summer” and “Whole Lot in Love,” which he performed at San Diego’s Boots in the Park music festival.

Performing at a KNIX Country 102.5 radio event called the KNIX Secret Show in his hometown of Phoenix, Arizona, Burke surprised the audience in more ways than one. See, the Secret Show is just that – a secret! Nobody, not even the radio station’s DJs hosting the event, know which country stars will be performing until they appear on stage. Past Secret Show performers include Justin Moore, Chris Young, Jake Owen, Darius Rucker, and Jason Aldean.

Burke was one of the performers at the Secret Show, along with Dustin Lynch, to sing a few of his hits and since he was in his hometown, he brought out a family member that is extremely important to him – his great grandfather. The singer explained to the crowd that his great grandpa was a World War II veteran, and immediately after they walked out from backstage, the electric crowd began chanting, “USA! USA! USA!”

It was a moment Burke and his great grandfather will never forget, and neither will we.

Watch the chill-inducing moment in the video courtesy of the radio station below.

WOW… Our #KNIXSecretShow kicks off with an emotional moment! Austin Burke brought out his great-grandfather who served in WWII… Thank you for your service sir!!!!! ❤️

And check out the moment from a fan’s perspective in the crowd!

I got to bring my World War II Veteran Great Grandpa out on stage tonight in front of an electric Arizona Hometown Crowd. I can’t thank you enough AZ! U.S.A….. U.S.A…. @knixcountry #knixsecretshow