By Jennifer Pernicano on April 1, 2019
Advertisement 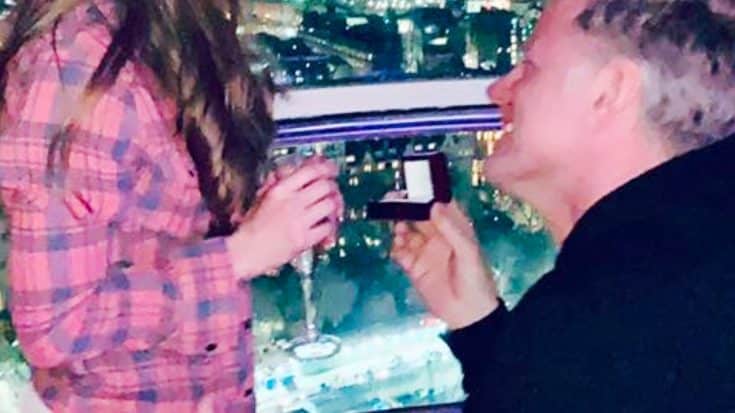 This self-proclaimed “hillbilly” is gettin’ hitched!

Surrender to what is. Let go of what was. Have faith in what will be…..I surrender with a smile on my face?? ? @ashlynosmerphotography

Country singer Tara Thompson, who happens to be a cousin of the legendary Loretta Lynn, never thought she’d get married. Turns out, she was wrong!

Happy Birthday to the QUEEN of Country music!!! She is my fav Hero:)!!! I will be lucky as hell if I'm half the woman…

While on an adventure on the London Eye, which is a cantilevered observation wheel on the South Bank of the River Thames in London, England, her longtime boyfriend got down on one knee and asked her to marry him. She documented the proposal on social media.

“Comin’ from a girl that said she would NEVER get married…My stubborn ass said YES?… [because] he’s perfect,” she captioned the series of photos.

In the photos, you can tell she is giddy with excitement and surprise, and so is he! Thompson also showed off the gorgeous ring, which is a round diamond on a simple silver band.

Thompson was raised in the Great Smoky Mountains and moved to Nashville as a teen to pursue country music. She became a regular performer at many of the local honky-tonks in Downtown Nashville, including Tootsie’s World-Famous Orchid Lounge, where she frequently covered classic songs from artists like Willie Nelson and Patsy Cline.

According to her artist page on the Grand Ole Opry’s website, she “actually got fired from Tootsie’s because my set was just too old-school.”

After six years of singing in bars, she signed a joint venture songwriting contract with Big Machine Music and Spoon’s Tunes Publishing and released her debut single “Someone To Take Your Place” in 2016.

Hey y’all!! My debut single #SomeoneToTakeYourPlace is officially at Country radio! Call and request it at your local stations!

Watch Thompson’s music video for her song “Someone To Take Your Place” below.