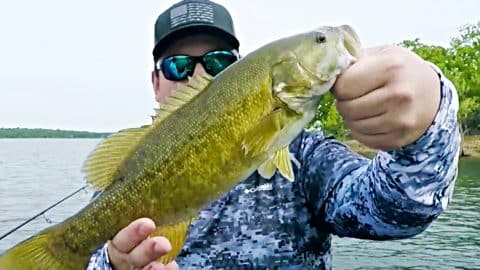 Country music singer-songwriter, Luke Combs is known for his deep voice and ability to bring a smile to our faces with songs like “When It Rains It Pours.” But what you might not know is that he is an avid fisherman, and this video proves it!

At 28 years old, Combs has been singing since he was just a kid. Originally from Asheville, North Carolina – he attended Appalachian State University which is where he played his first country music show at the Parthenon Cafe. It was then that he realized music was his passion – and lucky for us, decided to pursue it.

Pretty cool getting to go back home and do the coin toss at the @appstate_fb game. Thanks for having me fellas

After moving to Nashville he has given the country music world some of the best #1 hits we’ve heard in a while. His deep voice and southern drawl are instantly recognizable.

Not to mention he can give you a good laugh with lyrics like “Then I won a hundred bucks on a scratch-off ticket/ Bought two twelve packs and a tank of gas with it/ She swore they were a waist of time, oh, but she was wrong/ I was caller number five on a radio station, won a four-day, three-night, beach vacation/ Deep sea, senorita, fishing down in Panama/ And I ain’t gotta see my ex-future mother-in-law anymore/ Oh Lord, when it rains it pours.”

But what we really love about Combs, is that he is truly a down-home country boy. From his twangy vocals to his boots – he is bringing back what country music used to be, as well as living out the country lifestyle to its fullest.

Yall did it! “When It Rains It Pours” has been named a finalist for the CMT Music Awards Video of the Year! To vote, head over to my Twitter (@lukecombs) and RT my last tweet (link in bio) or tweet #CMTawards and #VOTELUKE. The artist who receives the most amount of tweets between now and 8:15 PM ET tonight will win! Y’all are the best. Let’s do this!

One example of this was his recent fishing trip in Ozark, Missouri! Combs teamed up with Bass Pro Shops and Columbia PFG for a little friendly competition on who could catch the biggest fish. Combs named his team “3x” and went head to head with Bass Pro Shop’s Ambassador Kaitlin Woodward. The competition was stiff but they still kept it lighthearted with friendly jokes between the two boats.

Combs brought his longtime girlfriend, Nicole, along to help him with the competition. We don’t know about y’all – but we love seeing how down to earth she is in this video. Heck, she even kisses a fish!

Combs’ team won the first day with a 13 lb 11 oz bass, a full 7 oz more than his competition’s! But on day two the rains came in and the competition became even more fierce as the fish got active.

Check out the full video below to see who ultimately won the competition – and to see a special Luke Combs performance that he recorded on the lake specifically for Bass Pro Shops!

Got any crazy fishing stories or even “the-one-that-got-away” memories? Let us know in the comments. We’d love to hear from ya!