Country Star ‘Thankful For Another Day’ After Frightening Accident 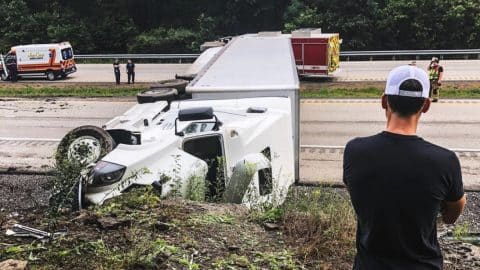 It was a scary morning for country star Granger Smith and his crew as one of the semis that travels with the singer’s tour entourage was involved in an accident.

Smith shared a photo on Instagram following the crash that shows an 18-wheeler on its side, blocking both lanes of the interstate. The cab of the truck appears to have extensive damage. Smith didn’t reveal the cause of the accident, but is thankful that the truck’s driver was unharmed.

“‪We’ve had a hell of a morning. No one was hurt, and my driver Charlie climbed out without a scratch. We lost gear, but all that can be replaced” Granger captioned the photo. “Grateful for my road brothers, and thankful for another day.”

‪We’ve had a hell of a morning. No one was hurt, and my driver Charlie climbed out without a scratch. We lost gear, but all that can be replaced. Grateful for my road brothers, and thankful for another day. See you tonight on stage in Baltimore!‬

The “Backroad Song” singer performed in Louisville, Kentucky, Friday night (August 10) and was en route to Baltimore, Maryland, when the accident occurred.

Saturday’s accident isn’t the first time Granger Smith has had tragedy strike while on tour. In December 2016, Smith took a frightening fall off the stage at Sayreville’s Starland Ballroom in New Jersey. A fan captured the fall on video that shows Smith standing on a monitor when it gave way causing him to crash into a metal barricade. He finished his set, but later checked into the hospital and sent to a Level 1 trauma center with two completely separated, broken ribs and a punctured and partially collapsed lung.

We are thankful that Granger Smith and his crew are okay and look forward to seeing them back on the road!