By Miranda Raye on August 13, 2018
Advertisement 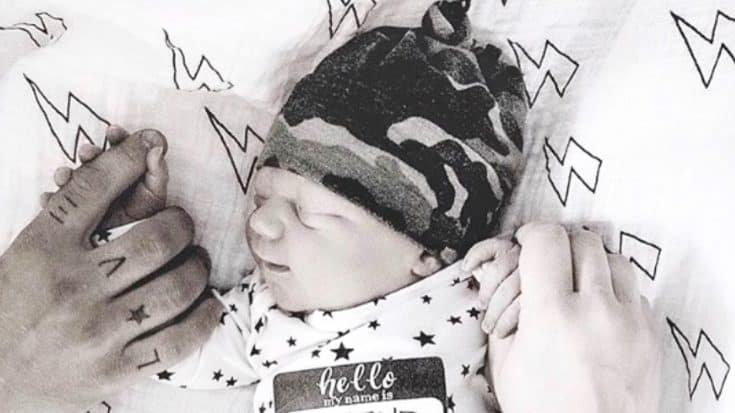 Just a few months after they married in September 2015, LOCASH‘s Preston Brust and his wife, Kristen, welcomed their first child, a little girl they named Love Lily. The beautiful baby girl was born in January 2016, and it wasn’t long before her parents planned to give her a sibling.

Kristen was pregnant yet again in 2017, expecting the arrival of a new bundle of joy in August of that year. But as she revealed in a heartbreaking blog post, she had suffered a miscarriage.

“i am writing this six weeks after i lost my second baby,” she wrote. “one in three women miscarry. i am one.”

After suffering so much heartache last year, the Brusts were overjoyed to announce in April that they were expecting yet again. “with full hearts, we’re excited to announce we have a new roommate movin’ in this #August,” read the caption to a post shared on the LOCASH Instagram.

Well now that baby is here!

LOCASH was getting ready to perform at the All Ohio Balloon Festival in Marysville, Ohio on Friday night (August 10) when Preston got the call that Kristen was in labor. It looked like their new baby was going to arrive earlier than expected!

Because of baby Brust’s unexpected arrival, LOCASH was forced to cancel their Ohio concert. They later took to Twitter to explain why, and promised to make it up to fans for canceling the show.

Hey everybody. Update coming soon. Shows will go on as usual tonight and so on. But wow, if no one understands the birth of a baby, oh well. We have nothing to do with refunds or tix prices That is up to venue, not us, I’m sure and hope they work it out for you. We apologize. https://t.co/dqL7koKHRx

Later that day, the Brusts welcomed their first son. The couple shared a photo of their darling baby boy on the LOCASH Instagram, and also revealed his unique name.

“Hello. My name is Legend Wilde,” read the caption accompanying the photo of the sweet infant. The couple explained the reason why they chose his name, saying, “Every map in life needs a Legend.”

From the sounds of it, the Brusts are referring to their family as the “map,” and baby Legend as the guide in their lives.

Hello. My name is Legend Wilde "…and just like that, our hearts have opened up in all new ways. Every map in life needs a Legend. We're so blessed." -pb•kb•&•love #FeelsLikeAPartyOf4

A huge congratulations to Preston, Kristen, and Love on their new addition! We can’t wait to watch him grow through the years.