Couple Dies Together Holding Hands After 62 Years Of Marriage 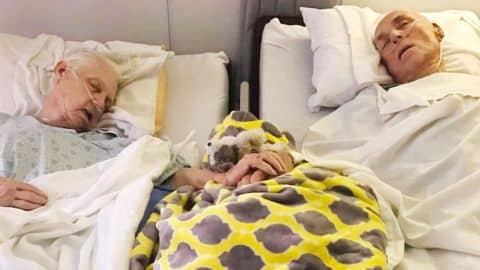 On April 21st, 2017, married couple of 62 years, Tom and Delma Ledbetter died within two hours of each other. The sweetest image was captured of them holding hands right before they passed, taken by one of their daughters, Donetta Nichols.

Headed to Heaven Together

Donetta says it was April of 2017 when her mother Delma became sick and had to go to a nursing home to keep constant medical watch on her. According to Click2Houston, Delma just laid there, and Donetta said…

It was just a few days later the same thing happened to Tom and he was taken to the same hospice to lay in a bed right beside Delma.

“We got him over to the nursing home with Mama. They had pushed their little beds together and Mama was laying right there, facing him. She was asleep and Daddy goes and he reached over there and he grabbed ahold of her hand and he just laid there with her, and it was so sweet,” Donetta said.

It wasn’t long after that, Tom passed away. Within and hour and a half Delma passed away too. It’s like they knew and wanted to leave at the same time – a pure love story.

The two met back in their 20s when Tom was in the military stationed in Florida. According to Nichols, her mom had just moved to Florida with her girlfriend and the Ledbetters met through a mutual friend. One day Tom had to move his car, so Delma rode with him a few blocks and when they parked, that’s when Tom grabbed her by the hand and gave her a kiss on the cheek. They got married three weeks later.

It was just like a love story straight out of a romance novel, but this one was real.