Couple Gets Married At Bass Pro After Wedding Venue Closed 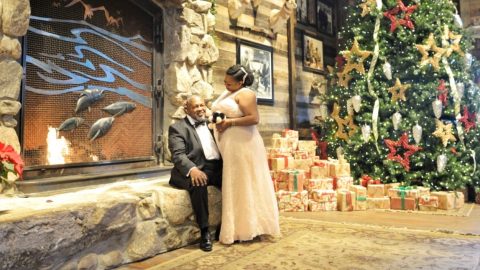 Because of everything going on in the world, couples who planned to get married in 2020 had to change their plans. Some moved venues and downsize, others had to postpone, and some couples were forced to flat-out cancel their weddings.

But despite the challenges, many couples were still able to celebrate their love, even if things didn’t turn out as they planned.

One couple in Connecticut named Ronda and Edward had to change their wedding plans when their chosen venue closed. They still wanted to get married when they originally intended, so they improvised and found a new venue.

They landed on a pretty unique location…a Bass Pro Shop in the city of Bridgeport.

Bass Pro Shops shared a post about Ronda and Edward’s wedding on its social media pages along with two pictures from their ceremony. The duo said “I do” in front of the store’s fireplace, which was decorated for Christmas at the time.

There was also a tall Christmas tree off to the side that was decorated with large, star-shaped ornaments.

“Love finds a way,” Bass Pro Shops wrote next to the pictures from Ronda and Edward’s ceremony. “When Edward and Ronda’s wedding venue closed late last year, they didn’t let that stop them from celebrating their special day their own way.”

Even though Ronda and Edward’s original wedding plans didn’t pan out, it looks like they had a stunning ceremony. Check out the pictures from their special day below.

Congratulations to the newlyweds! We wish them lots of love and happiness in the years to come.