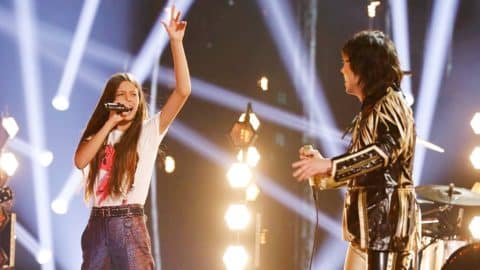 From the get-go, young Courtney Hadwin was pegged as a frontrunner on her season of America’s Got Talent.

Prior to her audition, she confessed to the judges that she was “nervous” about performing. But once her song kicked off, all of those nerves faded away.

The shy school girl disappeared in an instant, and was replaced by a confident rock-and-roll powerhouse. Her electric performance of UFO’s “Too Hot to Handle” left a strong impression on judge Howie Mandel in particular, who made her his golden buzzer pick.

Fighting Through To The Finale

Mandel’s choice to hit the golden buzzer for Hadwin was one that millions agreed with as well. She continued to advance through every subsequent phase of the competition, thanks to viewer votes.

After weeks of captivating viewers with her intense performances, Hadwin found herself in the finals.

While Hadwin didn’t end up winning, she still walked away from the competition as one of the season’s standout performers. Her star is still shining, especially after a fiery duet she sang with English rock band The Struts during the finale.

In addition to performing the Struts’ own song “Could’ve Been Me,” the then-14-year-old Hadwin sang “Piece of My Heart.” The song has been recorded many times, notably by rock legend Janis Joplin when she was the lead singer of Big Brother and the Holding Company.

“A Piece of My Heart” is such a popular song, that it’s been recorded by artists outside of the rock sphere as well. In fact, it’s also well-known as a country music hit, thanks to Faith Hill.

Before recording the song, Hill admitted she had never heard Joplin’s famous version. The producers decided to keep her from listening to it so she would approach the track with her own unique style.

The tactic worked, and Hill’s rendition of “A Piece of My Heart” became a number one country hit.

Just Listen To This Gal Sing It

To say that Hadwin brought down the house with her performance of the song would be an accurate statement. Every time the camera cut to the judges, you could tell they were in complete awe of the young singer’s talent.

Hadwin may not have won the competition, but this performance proves that she has what it takes to win over the rock and roll world. She’s already the next big thing in the genre!

Go ahead and prepare to be stunned when you watch Hadwin sing “Piece of My Heart” in the clip below. There’s no denying it…this girl is going places!