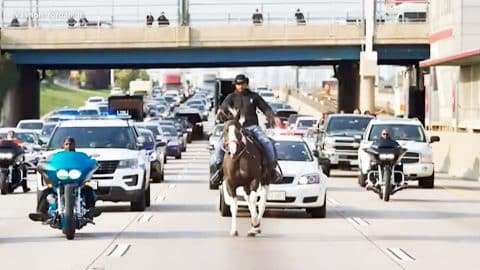 Drivers commuting home Monday evening, September 21, 2020 saw an unusual sight on the freeway. A cowboy riding his horse in the middle of rush hour traffic.

Adam Hollingsworth is a 33-year-old activist known as the “Dreadhead Cowboy” who brought traffic to a halt by riding a horse for more than seven miles down the Dan Ryan Expressway in Chicago. He was accompanied by a group of motorcyclists.

According to Hollingsworth, he did it all in support of the #KidsLivesMatter movement.

“Kids lives matter. Until kids lives matter, nothing else matters,” he said during a Facebook Live just before he rode onto the highway. “We’re fitting to shut down the whole Dan Ryan.”

Traffic backed up behind Hollingsworth in the approximately 30 minutes he spent on the highway. At its top speed, the horse galloped at about 15 miles per hour while averaging around 10 to 12 mph. Hollingsworth made it  7.5 miles before he exited the freeway and was promptly arrested for reckless conduct, disobeying a police officer and criminal trespass to state-supported property.

According to the police, the horse sustained several injuries. It was bleeding from the left hoof, injured on its right hoof, and the right side of its body had bleeding sores from the saddle. The injured horse was taken away for treatment with Animal Care and Control.

Watch a clip of the event in the video below.

BREAKING: The Dreadhead Cowboy is riding his horse on the Dan Ryan Expressway in Chicago, Illinois!This is in support of his #KidsLivesMatter movement. Adam Hollingsworth