By Jennifer Pernicano on March 17, 2021
Advertisement 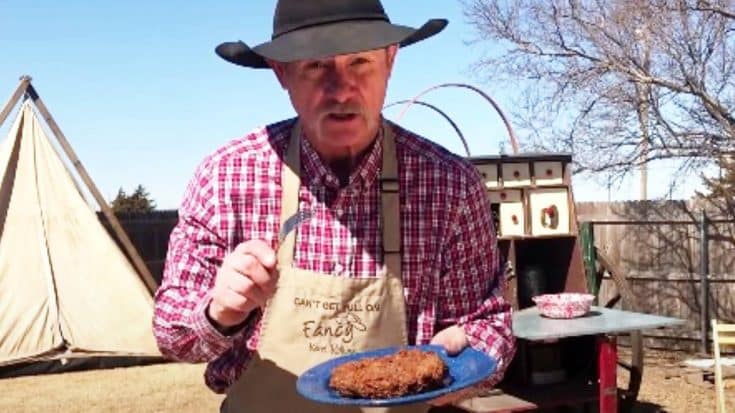 From 2006-2011, celebrity chef Bobby Flay hosted a show on the Food Network titled Throwdown! with Bobby Flay. On the show, he would travel around the country and challenge a cook to a “throwdown” of their specialty recipe, whether it be wedding cakes, pizza, barbecue, and more.

The cooks would think they were participating in some other Food Network special and Flay would show up and challenge them. Sometimes, Flay would win, and sometimes the cooks would best him.

For one episode, Flay went up against a “bonafide cowboy” named Kent Rollins, who specializes in country fried steak with a recipe he perfected 15 years prior.

In 2018, Rollins filmed a YouTube video to teach his 1.59 million subscribers how to beat Bobby Flay in a chicken fried steak throwdown, since that’s what he did!

Rollins explained that he has 3 steps into making his chicken fried steak.

The right kind of meat is the round. He says, “For the premiere chicken fried steak of all, it is inside of the round.” The meat also has to be properly cubed or tenderized. If you buy your meat from a butcher, they can do this for you, but if you are doing this yourself, you can use a meat tenderizer and “whack it.”

Once you have the right meat, you have to make it crispy. Rollins explains that his wet recipe calls for an egg, butter, and Mesquite Seasoning mixed together. The dry ingredients include flour, more seasoning, baking powder, and cornstarch.

He makes sure to soak the meat in the wet mixture, get it coated in the dry mixture, then repeat, which he calls “double baptize.”

Next, Rollins fries the meat. He prefers to deep fry, while his mama pan fries, so it’s really up to the cook! Either way, you need a good fry oil – he uses liquid shortening, canola oil, or peanut oil – and does it in a cast iron dutch oven.  Get the oil to 350 degrees and drop the meat in! It takes only a few minutes to get the steak to be golden, brown, and delicious, so you have to keep your eye on it.

Check out his step by step tutorial, as well as the exact recipe, below.