Cowboy Teaches How To Make The “Best Sloppy Joes”

By Jennifer Pernicano on April 9, 2021
Advertisement 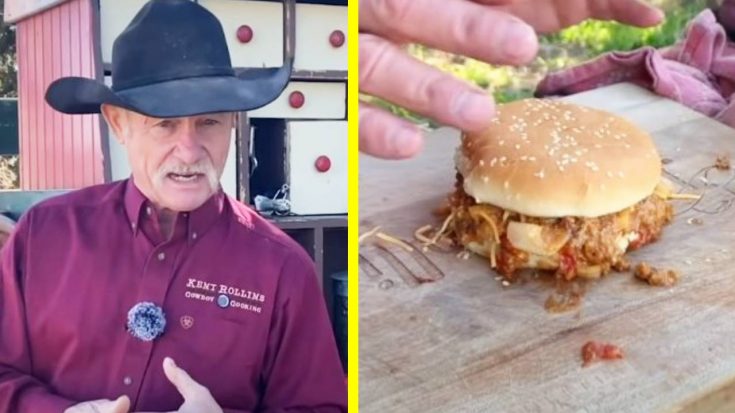 If you love outdoor cooking, then you have to look up Cowboy Kent Rollins on YouTube. This cowboy has been mastering outdoor cooking for over 25 years as a chuck wagon and cowboy cook!

Even if you haven’t seen his YouTube videos, you may have seen him on the Food Network! He has appeared on Throwdown! With Bobby Flay, where he beat Bobby Flay with his chicken fried steak recipe, Chopped Grill Masters, Chopped Redemption and Cutthroat Kitchen.

He created a YouTube channel to show off the recipes he has perfected in the “cowboy” style, which usually consisted of using cast iron skillets and dutch ovens!

In a video posted in February of 2020, Rollins showed his 1.6 million subscribers how to make what he calls the “Best Sloppy Joes.” The video kicks off with a clip from his Chopped days, where one of the dreaded basket ingredients was a can of sloppy joe mix. He assured his followers that his recipe is much better than what was in that can!

Rollins said that his sloppy joe recipe will “make your taste buds get out of your mouth and run a race. They’re gonna set a record, they are!”

He explained he has made this for cowboys when they are breaking camp and moving cattle – one time up to 14 miles! They would just ride past his chuckwagon and grab a sloppy joe for the ride. Rollins said the cowboys would keep coming back until they ran out, that’s how good they are!

He cooks the sloppy joes in a cast iron dutch oven using certified angus beef and seasons it with his own special spice blend, which you can purchase here.

When making this recipe indoors, you can use a regular cast iron skillet.

Once the meat is browned, he discards the grease and adds chopped onions and a can of diced tomatoes and green chilis.

Rollins also adds yellow mustard, barbecue sauce, his homemade chipotle relish, which is for sale in his online store here, brown sugar, and cheese. Once you let it simmer for a while, and the cheese is melted, you spoon it onto hamburger buns, slap a pickle on top, and serve immediately!

He noted that when he was a kid, his mom would just brown the meat in a skillet, then throw everything in a crock pot on low and everything would be ready when he and his dad got home from a long day of work.

To watch Cowboy Kent Rollins’ tutorial on how to make the best sloppy joes, click play below!

You can print his recipe here.