By Manly Bryant on September 30, 2022
Advertisement 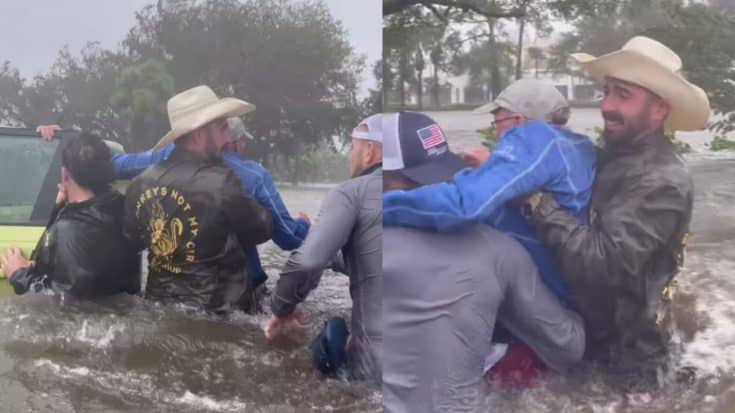 Hurricane Ian has caused a lot of destruction, but one heartwarming video that is taking the Internet by storm shows the heroic moment a few cowboys came together to rescue an elderly man who was stuck in his vehicle.

The video was captured on September 28 when flooding was at its worst and shows the man trapped inside his car while the vehicle was being overtaken by floodwaters.

“We saw an elderly man struggling in his car, and we knew he needed help,” Benny from the Instagram page @colliercountycowboys wrote.

The video showed the cowboys lifting the man from his vehicle that was submerged in floodwaters in Bonita Springs and being carried in waist-high waters to safety.

The cowboys noted that the man’s car door was wedged shut due to the force of the water but the group of good samaritans were able to pry it open and get him out.

“The guys all maintained to grab the door and pry it open,” Benny said. “He was a bit in shock, so he didn’t want to let go, so we assured him we were there to help him.”

The cowboys held tightly onto the elderly man as they carried him out of the fast-moving current of the water to the safety of the shore.

Jennie O’Hara wrote on the Instagram post, “Watching you on Fox 5! Made me cry because I would hope someone like you guys would help my dad the same!! God Bless!!”

Hurricane Ian brought in 150 mph winds and a record-setting storm surge that slammed Southwestern Florida in one of the most historic storms that the state has experienced.

Watch The Footage In The Video Below

A post shared by The Collier County Cowboys (@colliercountycowboys_)