By Manly Bryant on January 21, 2020
Advertisement 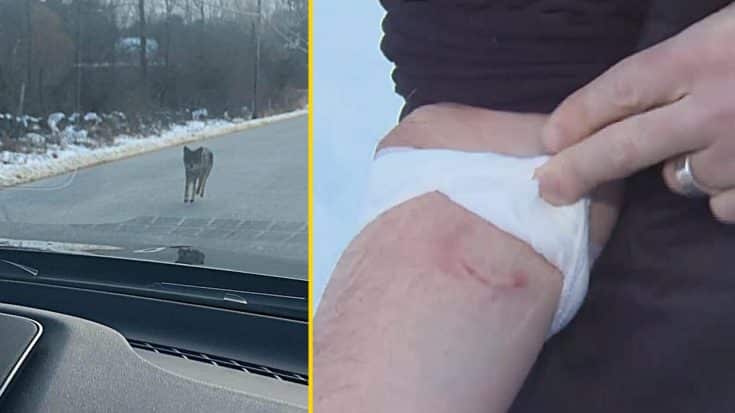 This past Martin Luther King, Jr. day (Jan 20th, 2019), a New Hampshire family was enjoying the day off work and school hiking in the woods when a coyote spotted them. It snuck up on the family and grabbed one of the younger sons by the hood of his jacket and pulled him down to the ground.

*** ALERT ***Coyote attack in the area of Wild Pasture Road & Hemlock Road.Keep your pets & children in your residence. If you spot the coyote do not approach it & call the Kensington Police immediately.

Ian O’Reilly, the father of the family told CBS station WBZ-TV “There was no running away, it would not allow us to run away. It was very much the aggressor. I did kick him square in the jaw once that put him to the ground and I was able to jump on him after that.”

Ian went on to tell that his mind flipped into protection mode and he grabbed it by the neck while it took bites of his arm and chest. The terrified mother gathered all three of their children and stood back while their father battled the beast.

The battled lasted for several minutes and while it was happening she called 911 to alert the authorities. Eventually, after what felt like forever, Ian was finally able to strangle the coyote to death and save his family.

Ian said, “In the moment you don’t really pay attention to what’s going on, you just try to go with whatever goes through your brain, instincts I suppose.”

What Happened After The Battle

The police arrived and got Ian to the hospital to treat him for any potential rabies and also confiscated the coyote to test it for rabies as well. The O’Reilly family said this is not the first time their kids have been attacked. Last year one of their sons was bitten by a raccoon while playing the backyard. Even so, they say this will not stop them from going outside.

The coyote was also believed to be the same one that reportedly bit a woman and attacked a pair of dogs and also chased after a car that day. Even though that’s possibly the case the New Hampshire Fish and Game said they’re still not ruling out that it could have been two different coyotes.

This is a WILD story: A father in NH fought and killed a coyote with his bare hands after it went after his young son.