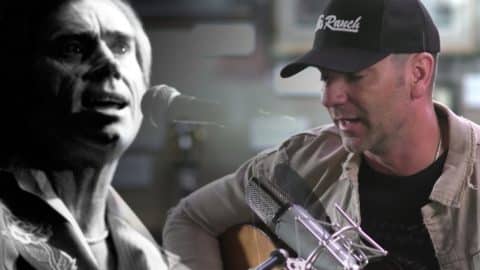 Inspired by the gold and platinum records surrounding him at the George Jones Museum in Nashville, Tennessee – Craig Campbell paid tribute to the legend himself with a beautiful cover of the 1980 #1 hit, “He Stopped Loving Her Today.”

The song was written by Bobby Braddock and Curly Putman and while it was a quick hit with fans – George Jones needed to warm up to it before finally agreeing to play it.

In his autobiography, I Lived To Tell It All, Jones admits that he originally thought the song was a dud. His exact words were, “Nobody will buy that morbid son of a bitch.” He had a change of heart and the song was released April 1980.

The song saved his career. After realizing how much his fans loved the tune, he admitted that his “four-decade career was salvaged by a three-minute song.” Billboard agreed. After six years without a top hit, the mournful tune he thought no one would buy climbed to the #1 spot and stayed there for 18 weeks.

Since then, the song has been covered by many country artists that looked up to George Jones. The most memorable being Alan Jackson‘s rendition of the sad melody at Jones’ funeral. As Jackson finished his performance saying, “We love you, George,” there was not a dry eye in the crowd.

Now, the next generation of country singers is carrying on the legacy of George Jones. Craig Campbell recently released his intimate performance of the song for Country Rebel’s George Jones Sessions, a “Tribute To The Possum.”

Sitting on a bar stool with guitar in hand, Craig Campbell starts strumming the sorrowful tune. All of a sudden, he is singing the words that will always stop country lovers in their tracks – “He said I’ll love you ’til I die…”

The “Outskirts of Heaven” singer’s voice is perfect for Jones’ song. His deep voice sends chills through your spine and perfectly captures the despair of lost love talked about in the song. With just the right amount of twang in his voice – he does The Possum proud.

Make sure to look for Campbell on tour & don’t forget to check out his video recording of the classic country hit “He Stopped Loving Her Today” below. Let us know what you think in the comments!