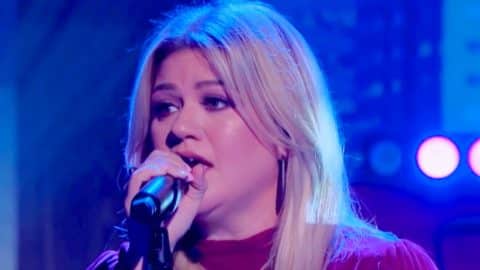 Lee Ann Womack‘s “I Hope You Dance” is one of those once-in-a-lifetime type of songs. No one has ever been able to replicate it, its magic, or the emotional hold it has on people.

Released in 2000, “I Hope You Dance” was written by Mark D. Sanders and Tia Sillers. Their beautiful lyrics were made all the more stunning with Womack’s heavenly voice as their messenger.

The song reached the top spot on the U.S. Hot Country Songs chart and crossed over to secure the 14th position on the all-genre Billboard Hot 100. It later went on to win a Grammy for Best Country Song.

With such a storied legacy behind it, “I Hope You Dance” is one song many singers shy from covering. But not Kelly Clarkson.

The American Idol winner has always made cover songs part of her shows. After growing up surrounded by country music, many of her go-to covers have been country hits

During a 2012 show in Camden, New Jersey, Clarkson dared to take on Womack’s “I Hope You Dance.” Her performance left the audience in awe, with videos of her cover generating thousands of views.

Now, eight years later, Clarkson decided to revisit “I Hope You Dance” for the “Kellyoke” segment of The Kelly Clarkson Show.

Clarkson opened the song by singing in a hushed, delicate tone. But as expected, she let her voice grow stronger and more powerful until she reached the chorus, when both she and the band burst into an explosion of sound.

The audience couldn’t keep themselves from cheering in that moment, as they were completely amazed by what they heard. Seconds later, they found themselves cheering yet again as Clarkson hit another strong note in the song.

Based on the crowd’s response, we’d say Clarkson’s updated cover of “I Hope You Dance” was just as well-received as the one she performed in 2012. Go ahead and watch it in the video below.

This performance goes to show that Clarkson truly is the queen of cover songs!