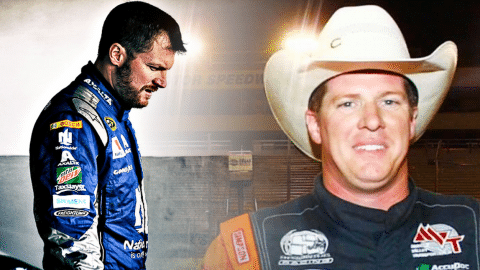 Just hours after the well-known driver was killed during a sprint car race, one of NASCAR‘s most-popular figures has spoken out on the sport’s terrible loss…

Many in the sport mourned the tragic passing of Jason Johnson before they took to the track on Sunday. They learned early in the morning that the 41-year-old sprint car driver had passed away from injuries sustained in a horrific wreck Saturday.

I never knew Jason Johnson but I followed his career in the dirt racing world. We will be racing with a heavy heart today as we lost another member of the racing family. #Prayers

Johnson was fighting to take the lead during Saturday’s World Of Outlaws sprint car race at Wisconsin’s Beaver Dam Raceway. Heading into Turn 3, Johnson’s car flipped violently and flew into several billboards and struck the outside wall before landing outside of the track. There was no catch-fence on that segment of the raceway.

I hope to hear good news about fellow MVT driver Jason Johnson. He was involved in a scary wreck in world of outlaws action tonight.

Taking to popular social media site, Twitter, Dale Earnhardt Jr. spoke out about the passing of a fellow driver – something that hits so very close to home for him.

When a racer loses his life, the world of motorsports across all disciplines takes notice and pays its respects. My heart goes out to Jason, his family, his friends, his competitors, and his fans. https://t.co/PWCjU61ffK

Dale Jr. was just one of many NASCAR and sprint car drivers that honored the late “Rajun Cajun” Johnson. The driver’s widow announced that a memorial will be held on Wednesday in Rocky Mount, Missouri at his racing shop.

With heavy hearts, we inform you of the passing of Jason Johnson. Our thoughts and prayers are with his family and friends. Please send prayers and respect their privacy. https://t.co/VLxy5oUjvE

Watch a summary of his season shared by World of Outlaws below and join us in saying a prayer for his family, friends, and fans during their time of loss.