Dale Jr. Once Told His Sister He Was “Done” With Racing 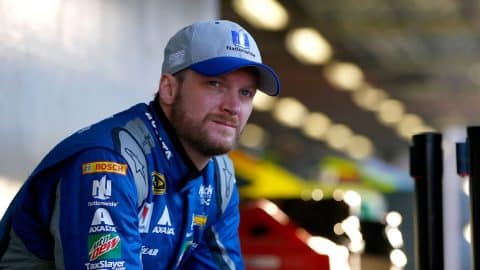 Dale Earnhardt Jr. spent more than two decades behind the wheel on the NASCAR track but he admits that it almost didn’t happen.

Earnhardt Jr.‘s NASCAR career took a completely different path after his dad’s tragic death after a crash at the 2001 Daytona 500.

During a recent interview on The Dan Patrick Show, the two-time Daytona 500 winner revealed that he considered quitting racing, especially in the first race at Rockingham for the Dura Lube 400 just one week after his father’s passing.

“I have certainly may have thought about a time or two,” Earnhardt Jr. said. “To be honest, when we went to Rockingham after dad died, I didn’t want to run that race. I didn’t want to be by myself at home neither. I wanted to be at the race track and I wanted something to occupy my mind.”

Earnhardt Jr. went on to explain his struggle in figuring out what it was he needed to do in order to heal from the tragedy that affected him.

“I didn’t want to be home not racing. That would have been a miserable realization when they dropped the green flag and you’re not out there. Like ‘Oh this is a bad idea. I should have been in that race.’ I certainly wasn’t getting up that morning saying ‘Man I am looking forward to this.’ I just needed to be at the track, and I didn’t need to be behind the wheel.”

Finally, he became completely transparent and talked about his thoughts of quitting racing.

“On Monday when it didn’t go right, I would walk into the office and talk to my sister or somebody and I would say ‘I’m done with this. This is not fun. I am not having any fun. I don’t want to do this anymore.’ But the machine was so big and kept going. I couldn’t stop it.”