By Jennifer Pernicano on February 17, 2021
Advertisement 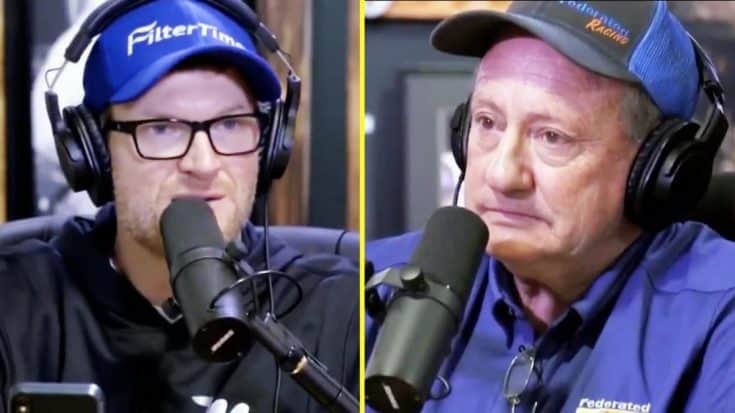 On February 18, 2001, Michael Waltrip, Dale Earnhardt Jr., and Dale Earnhardt Sr. were vying for the Daytona 500 trophy during the last lap in the 1, 2, and 3 spots, respectively.

It was looking like Michael Waltrip would win, with the Earnhardt father-son duo just seconds behind him. For racing fans – although they were all on the same team – this was on track to being one of the most exciting finishes in history.

Unfortunately, Dale Sr. collided with driver Ken Schrader and hit the outside wall head-on. Both vehicles then traveled across the race track and onto the grass. There was no movement from Dale’s #3 car, but Ken managed to wiggle out of his and ran to his friend’s window. After looking in, he immediately signaled for medical help.

Crews worked quickly to get Dale Sr. out of the race car, even cutting off the roof. After finishing the race, Dale Jr. began running to check on his dad. While doing so, he was interviewed about the race.

As we all know now, Dale Sr. was pronounced dead at the hospital from a basilar skull fracture and the entire world was in mourning. So many years have passed since this day and the man who was involved in the crash, the man who looked into Dale Sr.’s window after the crash, has never spoken publicly about what he saw, until his March 2020 appearance on Dale Jr’s podcast, The Dale Jr Download.

In the final 20 minutes of their two-hour podcast, Ken was informed that he has been the most requested guest in their 288 episodes. We can only imagine why. At the time of the interview, Ken still raced and 2020 marked his 50th year in racing, so it has been hard to schedule around that, but they finally got him.

A new @DaleJr Download – Ken Schrader: The Best Week Ever!

19 years after the crash, Ken stopped by Dale Jr.’s podcast, Dale Jr. Download, and it got quite emotional, as Dale Jr. read Ken a letter he wrote thanking him for never speaking about the crash or what he saw.

“I’ve known you a long time and a lot of time has passed since that happened,” Earnhardt Jr. reads. “And you’ve been a great friend to me. You’re one of only a few to see the darkest moment for my dad. Though you have intimate knowledge of those moments, you are a keeper of that delicate information. It makes me feel close to you, Kenny. I feel pain for you to have to carry that memory, but you carry it for me, you carry it for (sister) Kelley, for dad’s family, you carry it for anyone who’s ever cheered for him. It’s a secret that you’ll keep ’til your last breath. Kenny, I know you might sometimes wish you weren’t the one, but I’m glad it was you. I really appreciate you for who you are and the friend you’ve been to me.”

As Dale Jr. read the letter, Ken wiped away tears. You can watch this clip below and listen to the full podcast here.

Before @DaleJr let Ken Schrader leave the @DirtyMoMedia studio, he shared an emotional message on what he means to the Earnhardt family. #DJD pic.twitter.com/yuUtVhuJcB