Dale Jr. Talks About His Dad & How Things Would Be If He Was Still Around

By Manly Bryant on April 30, 2020
Advertisement 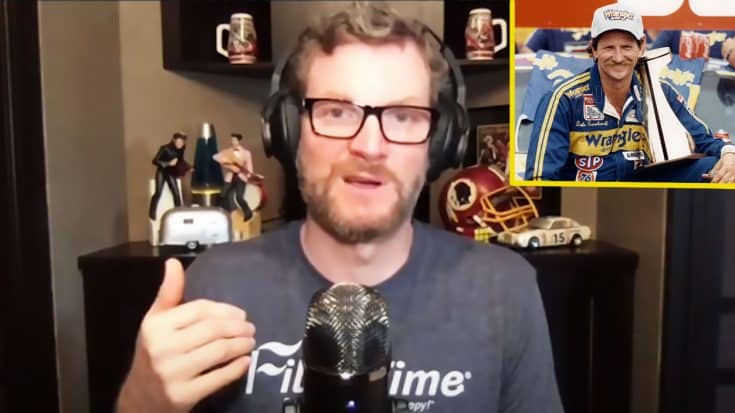 In April 2020, on Waltrip Unfiltered, Dale Jr. talked about what he thinks his dad would do and say if he was still here today.

One of the first things he talked about was how his dad would’ve loved his wife.

Happy 3rd anniversary to us. Im so lucky. We are kicking ass at this marriage/parenting thing too. Ready for 2020!

“I really wish that dad could have met Amy. He was really vocal to me about the girls that I would go out with…Him and Amy would’ve really got along great.”

Dale Earnhardt Jr. met his wife Amy Reimann, back in 2009. By 2016, they were married and soon after welcomed their daughter Isla Rose. Now, they have another child on the way.

“I would have loved to have shared Isla. And seen how dad was with her. I don’t know whether we would talk about me as a father.”

More thankful than ever this Thanksgiving! I’m so grateful for these two and our many blessings. Hope everyone is having a good day with friends and family. ? @kurtisdrums

Dale Earnhardt Sr. was a true racing legend and was regarded as one of the greatest drivers in NASCAR history. He was given several nicknames such as “Ironhead,” “The Intimidator,” and “The Man in Black.”

On February 18, 2001, Earnhardt Sr. died due to a head injury sustained in a collision during the final lap of the Daytona 500. As one of NASCAR’s favorite drivers and fiercest competitors, he was inducted into the NASCAR Hall of Fame in 2010. It’s been 19 years since his death and many things have changed in the racing world as well as Dale Jr.’s world.

Towards the end of the show, Dale Jr. shared this sentiment,

“Maybe he can see all of this, maybe he is looking down and proud, loving everything he’s seeing.”

Watch the entire video below of Dale Jr. on Waltrip Unfiltered.