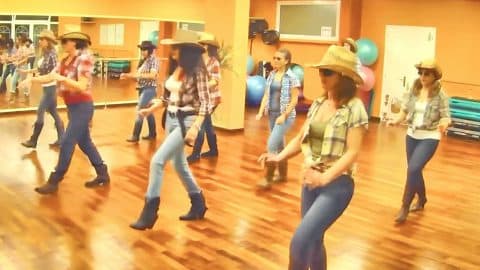 There’s something about certain country songs that make them the perfect backing track for a line dance. We’re sure you know some of those songs: “Boot Scootin’ Boogie,” “Watermelon Crawl,” and “House Party,” just to name a few.

As you would expect, there’s also a Trace Adkins song out there that was basically begging to have a line dance to go along with it.

That song is none other than “Honky Tonk Badonkadonk.”

Released in 2005, “Honky Tonk Badonkadonk” was a smash hit for Adkins. It climbed all the way to the second spot on the country chart and crossed over to claim the 30th spot on the Billboard Hot 100.

After over a decade, the song remains a fan-favorite part of Adkins’ concerts.

A Dance To Shake Your Badonkadonk To

So it basically seemed inevitable that a line dance to “Honky Tonk Badonkadonk” would come into existence. One talented group of dancing cowgirls crafted an intricate dance to the tune, which features more than just your standard kicks and turns!

Wearing cowboy hats, plaid shirts, sunglasses, and boots, these gals tore up the dance floor as they took off to the tune of “Honky Tonky Badonkadonk.”

Their dance features a fair share of hip-shaking, along with a few high leg lifts and other moves that surely gave them a full-body workout.

But don’t worry! We think the dance still looks easy enough for beginners to pick up on. Although it’s fast, it repeats a lot, so it’s something any person could learn with a little bit of practice.

So what are you waiting for? Strap on your dancing shoes and get ready to shake your groove thing to this “Honky Tonk Badonkadonk” line dance!