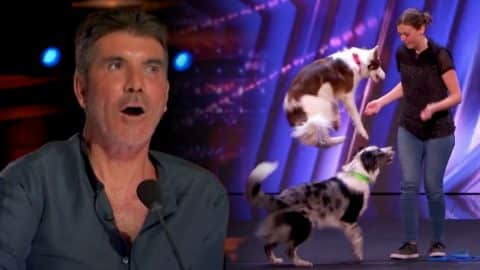 At this point, Simon Cowell and the other America’s Got Talent judges have seen a lot of talented animal acts. So anyone who wants to audition with their pets has to go the extra mile to impress them.

That’s exactly what one young woman named Alexandra Cote did when she auditioned for Season 16 of AGT with her dog, Tesla.

They kicked off their routine with a flourish, leaving the judges enchanted from the get-go.

The duo’s routine featured a bunch of flips, and Tesla pulled off each one flawlessly. Even the one when she jumped off of Alexandra’s back!

Simon made it clear he was a fan before the routine was even over. During the pair’s performance, he could be heard exclaiming “wow!”

But the routine became all the more spectacular when a surprise guest joined Alexandra and Tesla on stage. That surprise guest was Louka, another one of Alexandra’s dogs!

Louka held on to one end of a jump rope while Tesla bounced up and down to jump over its swing…and she cleared it every time.

Then, Louka joined Tesla in a continuation of the dance routine. Both dogs flipped and jumped through the air, crawled on their bellies across the stage, and posed on their hind legs with their front paws raised.

When AGT shared the video of Alexandra and her dogs’ performance on YouTube, they described it as “amazing.” We think that’s the perfect word to describe their audition, which you can watch below.

These dogs’ dance moves are even better than ours!