Darci Lynne Farmer Returns To ‘AGT’ To Give Mind-Blowing Performance 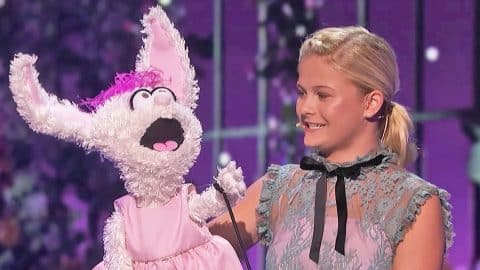 The reigning champion of America’s Got Talent returned to her old stomping grounds to show everyone just why she won the million dollar prize last summer. We all fell in love with 13-year-old Darci Lynne Farmer during Season 12 of AGT from the moment she walked on stage.

Just 12-years-old when she competed on the show, Darci and her puppet Petunia earned the coveted Golden Buzzer from judge Mel B after debuting their insane singing ventriloquism act.

After several incredible performances to songs like “Natural Woman,” “Who’s Lovin’ You,” and a seemingly impossible duet between two puppets to “With A Little Help From My Friends,” Darci was crowned the champion of Season 12, which won her $1 million dollars and a chance to headline her own show in Vegas. Her Vegas shows were so successful, she took her act on the road!

Season 13 of America’s Got Talent just started its live rounds, and Darci Lynne came back to where it all started to perform during the first live elimination night. She’s probably happy she was just there to perform and didn’t have to worry about the votes this time!

After Darci told everyone how excited she was to be back, Petunia expressed her frustration with being overworked the last year or so.

“You know what I’m really looking forward to? A break!” the cute rabbit said to the crowd. “I’m just so exhausted!”

Now, if you’ve watched Darci’s act before, you know that Petunia is a bit of a diva, so this behavior isn’t new at all! She broke out into a song called “Show Off,” from the Tony Award-winning Broadway musical The Drowsy Chaperone.

In a rare moment, Darci got to show off her natural singing voice when she covered Petunia’s mouth in the middle of the song.

Her performance proved, once again, why she is the reigning America’s Got Talent champion, and earned her a well-deserved standing ovations from everyone in the historic Dolby Theater.

Watch Darci and Petunia perform “Show Off” in the video below.