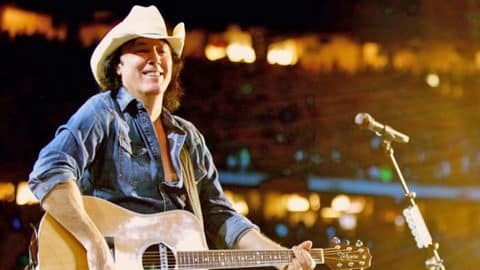 We guarantee you have sung his songs at the top of your lungs for many, many years. Not only is David Lee Murphy responsible for the hit “Dust on the Bottle,” he also had a hand in writing Thompson Square‘s “Are You Gonna Kiss Me or Not,” Jake Owen‘s “Anywhere With You,” Jason Aldean‘s “Big Green Tractor,” and Kenny Chesney‘s “Living In Fast Forward” – just to name a few.

He took a bit of a performing hiatus to focus on songwriting, but it didn’t take much convincing from his good friend Kenny Chesney to get back in the booth to record a new album. That album was No Zip Code, his April 2018 release that included the Chesney collaboration, “Everything’s Gonna Be Alright.” Chesney, his longtime producer Buddy Cannon, and Murphy all produced the album together.

While their duet was released as a single on November 6, 2017, it really took off during the Spring of 2018, reaching the number one spot on the Billboard Country Airplay chart on June 23, his first since “Dust On The Bottle” in 1995.

“It’s just really been unbelievable,” he told Country Rebel of hitting number one for the first time in over 20 years. “It’s been so fun this summer. This song actually came out towards the end of 2017, and starting this year, we kind of just hit the ground running and we haven’t looked back. It’s just been a fantastic year.”

When we asked about how they celebrated the single topping the chart, it turns out he and Chesney were actually together the night it happened!

He said, “Kenny and I were playing a show in Columbus, Ohio, the night we received word that ‘Everything’s Gonna Be Alright’ was going to hit number one. We definitely celebrated that night. We actually celebrated for about a week. Its a huge deal and I’m so thankful to country radio for supporting this song the way they have and for the fans who tell me stories every night we’re on tour about how the song has helped them through a tough time.”

If you thought Murphy was just going to stop while he was ahead, you thought wrong. With a number one single under his belt for this album, he seems hungrier than ever for another. He revealed to Country Rebel that his next single off No Zip Code will be “I Won’t Be Sorry,” which he co-wrote with Jason Sellers and Paul Jenkins.

Talking about his writing process, Murphy admitted that it varies from song to song. For his upcoming single, everything kind of just fell into place.

He stayed mum on when that single would actually hit country radio, but we hope it’s not much longer because it’s a song we think the masses need to hear! Take a listen to it below before it comes out on the radio.