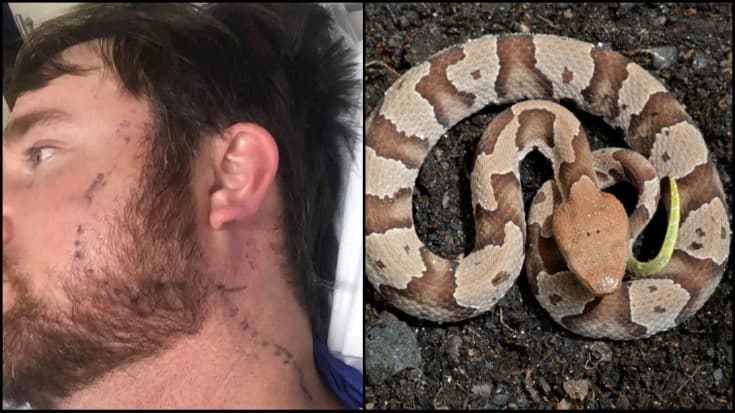 Hardy and a friend were hunting near Jackson, Mississippi, on Wednesday (January 15) when he became the victim of a freak accident. Hardy was on his way back to his truck when he came upon a flooded ditch. As he went to jump the ditch, he felt a sudden shock of pain in his head. “I thought somebody had shot me or hit me with an axe. It knocked the fire out of me. I just could not believe the force the snake had when it hit me,” Hardy told the Clarion Ledger.

“I backed up and shined my light to see what was in the tree and I saw the [copperhead] snake coiled up on a limb. It struck at me again and fell out of the tree that time.”

By the time Hardy got to his truck he was feeling severe burning and it was spreading and beginning to swell. The hunters didn’t panic, but called Hardy’s wife and the local hospital to let them know they were on the way.

Once admitted to the hospital, doctors administered five vials of anti-venom before airlifting Hardy to the University of Mississippi Medical Center in Jackson. The hunter was released from the hospital a day later but was prescribed two weeks of rest and recuperation.

The question remains, just why was a copperhead in a tree in January. Hardy believes that the snake “came out in the warm weather and got caught in the flood and found a tree to get in.”

Herpetologist Terry Vandeventer of Hinds County said copperheads have been known to climb trees, but it is a rare occurence.

“They are basically terrestrial snakes, but it’s been known for decades (that they will climb trees),” Vandeventer said, adding that snake may climb trees during the summer when cicadas emerge from the ground and “cling to trees and bushes while they shed their shells.” Copperheads will climb to eat the insects.

“Finding a copperhead in a tree in January is unheard of,” Vandeventer said. “I don’t doubt it went down the way he said it did, but in doing so it made him the unluckiest guy in America.”