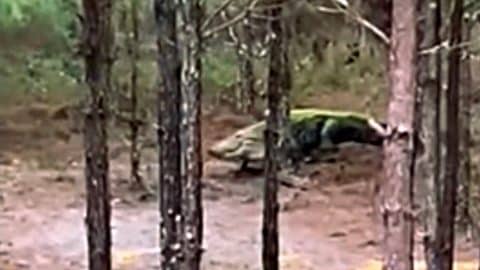 Bowhunter Mike Dupree was sitting in his deer stand waiting on a deer during the third week of November when a very large alligator came crawling beneath him.

Mike was located deep in the woods of Macon County, Georgia when he spotted the reptile. He said he heard something coming from far away and anticipated that it might be a deer and got his bow ready just in case.

However, to his surprise, it was not a deer at all so he quickly dropped his bow and grabbed his phone to start filming the gator. It slowly sauntered across the forest floor making its way through the trees before stopping at the corn pile that was laid out to attract deer.

The deer stand is located almost a mile from Flint River and a retention pond where many alligators live, including ones that have been recorded to be 13ft long.

The gator sat there for a while before eventually getting up and leaving right before it got dark. The only problem was instead of coming back the way it came, it walked towards Mike’s truck so he had a very eerie walk back to his vehicle in the dark.

The next day Mike told his coworker Jack Benjamin who told Georgia Outdoor News, “He said, ‘You’ll never guess what walked in on me.’ We started guessing, and it to got to where we were saying elephant, giraffe… no one guessed alligator.”

Watch Footage Of The Gator Below