Deer With Arrow Stuck Through Its Head Helped By Locals

By Manly Bryant on December 21, 2020
Advertisement 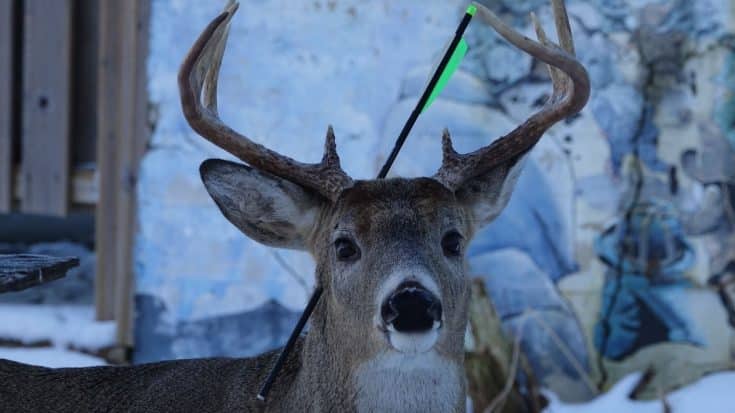 His name is Carrot, a deer who became a close friend to a Canadian family living in Kenora, Ontario. For years, has been visiting them and coming to their house.

“He didn’t hold the normal characteristics of a deer. It was something else and I can’t explain it,” Lee-Anne Carver a wildlife photographer explained to CTV News.

“Carrot’s personality is so unique, he’s impossible to misidentify. He was exceptional, and he continues to come back,” She explained to CBC News.

This time on December 9th, 2020, the visit was surprising. Carver’s husband walked to the yard to check on the deer, and came back with tears, CBC News stated. The deer had an arrow stuck through its head. His vital organs did not seem to be harmed. He was reacting normally.

“It was very disturbing to see. He was still acting like his normal self,” Carver told The Guardian.

According to Lee-Anne, there is a high chance the arrow was pointed out from above the deer, potentially from a window or a deck, as he was shot in a residential area.

The City of Kenora adjusted its bylaws in 2013 to allow to discharge a crossbow within the urban areas. The same thing happened in the City of Thunder Bay in 2012. Though it is legal, Lee-Anne sees it as an ‘act of animal cruelty’ as she explained to CBC News.

Initially, fears rose about the high risk for the deer of severe bleeding or nerve damage if the arrow was removed. However, a team from the Ministry of Natural Resources and Forestry dedicated themselves to help Carrot and to remove the arrow. They also gave him antibiotics. After a few hours, the deer was back on his feet.

A Facebook fan page was created by Lee-Anne where she shares the latest updates on Carrot.

Watch Video Of Carrot The Magic Deer Below