Derek Hough Dances At Rockefeller Tree Lighting & Sings “Sock It To Me, Santa” By Bob Seger

By Miranda Raye on December 5, 2019
Advertisement 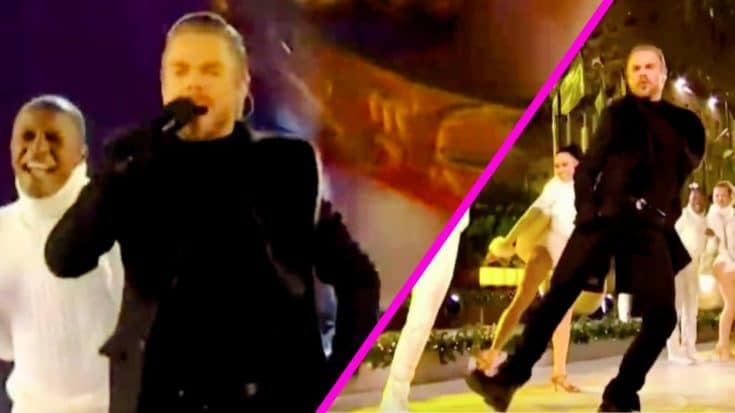 Every year, some of music’s brightest stars jet out to New York City to celebrate the holiday season at the Rockefeller Center Christmas tree lighting. Some of the artists who performed at this year’s ceremony included Gwen Stefani, Idina Menzel, and siblings Derek and Julianne Hough.

NYC Mayor Bill De Blasio and others led the lighting of the Rockefeller Center Christmas Tree in Manhattan on Wednesday evening. https://t.co/pPWT5cVJ3l pic.twitter.com/gQTe9mUTea

The Houghs first found their claim to fame as professional ballroom dancers on Dancing with the Stars. But the two siblings are multi-talented, and are both singers as well.

In 2008, Julianne released her debut, self-titled country album. The album was well-received by fans, and led to Julianne winning two ACM Awards in 2009.

That album contained a duet between Julianne and Derek, titled “Dreaming Under the Same Moon.”

Since then, Julianne and Derek have continued singing. Both of them have starred in live TV musicals (Julianne in Grease Live! and Derek in Hairspray Live!) and have performed together on their various tours.

In Julianne’s case, she recently released a new single, titled “Transform.” She also debuted a new Christmas song with her former Grease Live! co-star Jordan Fisher, titled “All I Want for Christmas Is Love.”

That was the song Julianne performed at the 2019 Rockefeller tree lighting, while Derek went for something a few decades older. He opted to perform a zippy tune called “Sock It To Me, Santa,” which Bob Seger released with his band the Last Heard in 1966.

A song like “Sock It To Me, Santa” is best performed by someone with energy and enthusiasm, which Derek isn’t lacking. It’s the perfect song for a showman like him!

In addition to singing, Derek also danced throughout the performance. His lively choreography only enhanced the song’s fun vibe.

You can watch Derek strut his stuff while singing Bob Seger’s “Sock It To Me, Santa” at the Rockefeller tree lighting in the video below. He’s such a talented performer!