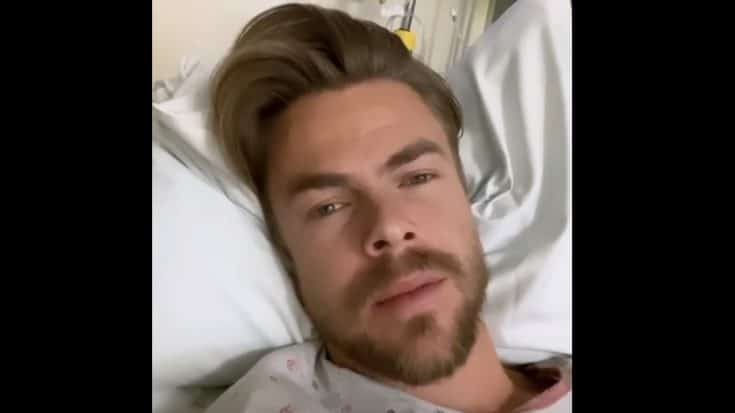 Former Dancing With the Stars pro Derek Hough had a rough weekend. The dancer underwent emergency surgery to have his appendix removed.

Hough shared the news on his Instagram story Saturday just prior to surgery, saying that he had had just returned from South Korea when his stomach started hurting and progressively got worse. After waking up in the middle of the night with severe pain, he did some research online, determining that he most likely had appendicitis.

“I could barely walk. I was kind of like crawling around on the floor, hunched over in pain,” Hough said. “So Hayley drove me to the hospital.”

He also shared a video of himself in a hospital gown shortly after surgery was over. He captioned the video, “Woke up at 3am with a severe and a sharp pain in my abdomen. Knew something wasn’t right. Turned out it was appendicitis and had surgery to remove my appendix straight away.”

The video shows Derek doing a “sexy little dance” for his girlfriend in his hospital gown. “This is me immediately after, still a little(a lot) medicated, giving [Hayley] a (sexy) little dance.”

Woke up at 3am with a severe and a sharp pain in my abdomen. Knew something wasn’t right. Turned out it was appendicitis and had surgery to remove my appendix straight away. This is me immediately after, still a little(a lot) medicated, giving @hayley.erbert a (sexy) little dance. Me: Is this doing it for you babe? Hayley: So hot. Thank you for lying to me babe 😉

Derek and his sister, Julianne, are gearing up for a holiday television special called “Holidays With the Houghs” that will air on NBC in early December.

“It’s definitely that classic variety show, but obviously with family, which is great,” Derek told ET. “We’re gonna have some amazing, amazing dances in there. Some really magical moments that we’ve been planning for a while.”

NBC reports that Holidays with the Houghs, will be “an hour-long show in which they will stage musical and dance performances, putting their spin on holiday classics. Along the way, there will be guest appearances from celebrity friends and top recording artists, comedy sketches, and surprises.”