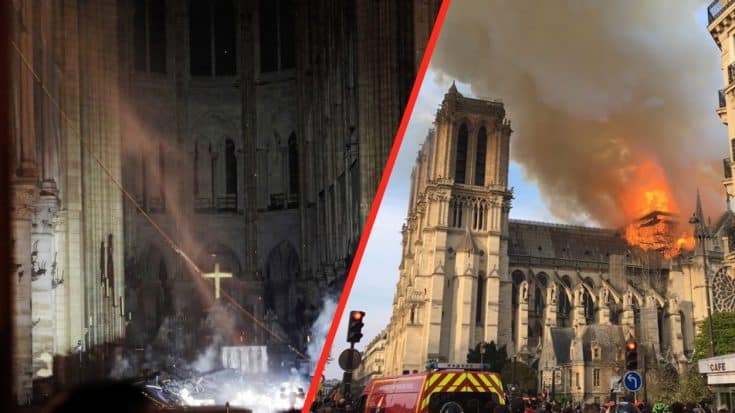 After more than 12 hours, teams of French firefighters finally were able to extinguish the blazing flames that had nearly destroyed one of the world’s oldest and most-known buildings: Notre-Dame.

The medieval Catholic cathedral was first built in 1345 after centuries of work and construction, being modified frequently since breaking ground in 1160 under Bishop Maurice de Sully.

Throughout the last eight centuries, Notre-Dame has survived some of the most horrendous of events – including plague, war, revolt, and near-utter destruction. But now, in the most advanced era, a fire has destroyed much of the cathedral.

The blaze broke out on April 15th, 2019 right at the beginning of the Catholic Holy Week and at dusk in Paris, a bright orange fire could be seen burning through the roof of this 850-year-old landmark.

By 8 p.m., the beautiful spire had already fallen and the roof collapsed into the building that was engulfed by flames.

After extinguishing the blaze and saving Notre-Dame’s iconic twin stone towers, firefighters were exhausted but had done everything they could to prevent the complete destruction of the cathedral.

As they had continued to battle the blaze, CBS News reports that a brave chaplain and a human chain of people worked diligently to rescue some of the most-precious artifacts from the holy space before they were destroyed. Among the pieces saved were the Crown of Thorns, the Blessed Sacrament, and others – all of which will be transferred to The Louvre Museum for safe keeping.

But one of the most remarkable stories that have come in the aftermath of this shocking destruction was the miraculous photograph that shows the cathedral’s cross and altar almost completely untouched.

Captured first by Reuter’s photographer Phillippe Wojazer, you can see the devastating effects of the fire and crumbled piles of wood and lumber in the middle of the cathedral – piled high set to be discarded.

But just beyond that sight, the cross stands tall, almost glowing with a golden hue. Smoke rises around the altar in light plumes, but it too remains standing, in remarkably good shape.

Smoke rises around the altar in front of the cross inside the Notre Dame Cathedral as a fire continues to burn in Paris, France, April 16, 2019. REUTERS/Philippe Wojazer/Pool #france #paris #notredame #fire #reuters #reutersphotos

Reported by CBS News, some of the most devastating photos show portions of the hand-carved vaulted ceiling had fallen through, as small fires continued to burn slowly above and draped an orange hue in the newly empty space.

Officials do not know for sure what started the fire, but many have suspected it was likely connected to the renovations that were happening at the cathedral. They don’t currently suspect arson or terrorism and have said there is no indication that the fire was started intentionally.

In the hours after the fire had been extinguished, millions of dollars had already been donated to help rebuild the cathedral, and $300 million was raised by two wealthy French businessmen alone.

Watch the video below for a first look inside the Notre-Dame Cathedral and witness the beautiful sight of the cross still standing.