By Manly Bryant on August 25, 2021
Advertisement 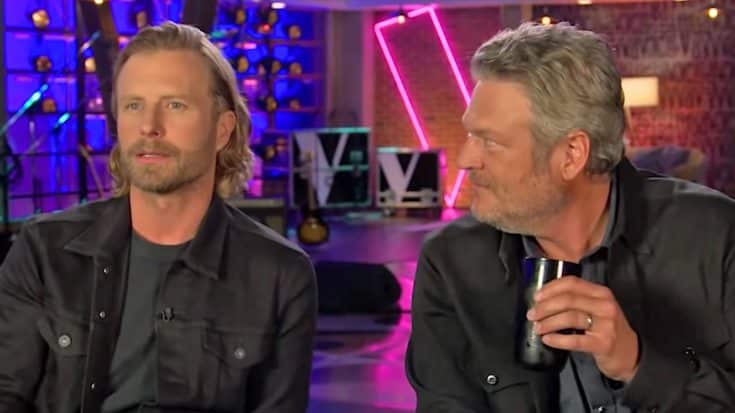 During a recent interview with Entertainment Tonight, country star Dierks Bentley shared what his wedding gift was to fellow artist Blake Shelton – even though he wasn’t invited to the ceremony.

“It’s really cool, the way that his wedding’s private like that, I’m so happy for him,” Bentley said during the interview. “He found Gwen and he’s doing so well, great music, recording together. He’s doing so great.”

When asked if he happened to get Shelton a wedding present, Bentley jokingly responded, “My presence at The Voice was his present!”

During Bentley’s 2021 Beers on Me Tour, he was able to take some time to join Shelton on a couple of episodes of NBC’s The Voice, as an advisor for Shelton’s team.

“It was amazing, you know? It was so great seeing him,” Bentley said in regards to joining Team Blake. “We hadn’t seen each other in a long time.”

In a previous interview with Access Hollywood, the duo joked about their coaching style on The Voice. When they both were asked about how long the two had been friends, Bentley joked, “Friendship? I wouldn’t call it a friendship. I wasn’t invited to the wedding.” Before he could continue, Shelton cut in saying, “Yes, you were! It’s on its way” and joked he was going to have a viewing of his wedding.

Watch the interview in the video below.