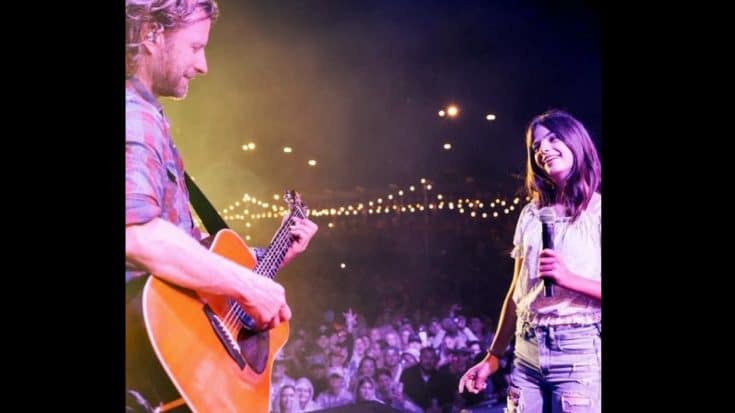 Dierks Bentley and his wife, Cassidy, share three children. They have two daughters, Evie and Jordan, and a son, Knox.

Evie is the eldest of Dierks’ kids, and she’s been bitten by the musical bug. From a young age, Evie has expressed an interest in singing…and she’s good at it too!

Dierks has been inviting Evie on stage with him for years. There’s a video of her singing “I’m Thinking of You” with him during a show at the Ryman Auditorium in 2012.

Evie has continued to join her dad for duets.

They sang Dierks’ song “My Religion” during a show in December 2018 when Evie was ten years old. Dierks hilariously tried to stop Evie from singing when she reached a part of the song about drinking, but she continued anyway.

This time, she covered Brandi Carlile‘s part in her and Dierks’ duet, “Travelin’ Light.” You can tell how much her talent has grown and developed over the years!

Another one of Dierks and Evie’s duets took place in Chicago at the Windy City Smokeout fest in July 2021 when Evie was 12. This time, Evie and Dierks sang his duet with Elle King, “Different for Girls,” which was released in 2016.

The song won the CMA Award for Musical Event of the Year and was also nominated for a Grammy.

Even though she’s young, Evie was more than willing to step up to the plate to cover Elle’s part in “Different for Girls.” She has so much confidence for her age!

Watch Evie and Dierks deliver their duet in the video below. Dierks must be so proud of Evie and her talent!