Diver Films Swimming With The Largest Living Snake On The Planet

By Manly Bryant on September 23, 2019
Advertisement 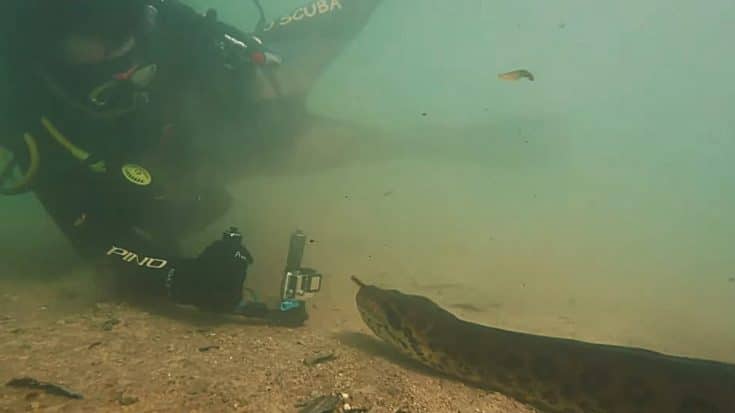 Bartolomeo Bove, a professional diver and videographer who usually swims with sharks has grabbed his camera gear and crew to travel to the Formoso River in Brazil and swim with the largest living snake in the world, the green anaconda.

Largest Living Snake In The World

These beautiful and majestic creatures are the largest and heaviest nonvenomous snakes in the world and have been reported to grow up to 35–40 feet long, typically weighing around 150 pounds.

They live in the murky marsh and swamplands of South America and Bove decided to go to the Formoso River because it’s said to have some of the clearest waters, making it the perfect place to film the green anacondas in the wild.

Swimming With The Giant Snake

Once they arrived, Bove and his diving partner, Juca Ygarape, went to the river and quickly found a 23-foot long female anaconda swimming around that weighed around 200 pounds. At first, she doesn’t seem very interested in the guys but then swims right up to the camera.

She licks the camera and some highly rare footage is filmed: “The anaconda swims calm and peaceful, completely indifferent to our presence,” Bove said. “Sometimes she comes closer, curious about my camera, licking the lens.”

Bove went on to say that the myth of the large anacondas being highly aggressive and violent creatures and a major threat to peoples lives is simply not true. His experience with the wild anaconda has been a pleasant one.

Watch The Anaconda Footage Below