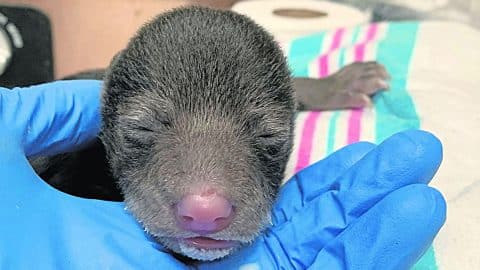 On February 5th in Washington County, Virginia an orphaned newborn bear was rescued after a pet dog found it in the woods and gently carried it home without hurting it. The dog’s owner called a licensed wildlife rehabilitator who then notified the Virginia Department of Game and Inland Fisheries (VDGIF) about the situation.

Bill Bassinger, a district wildlife biologist with the VDGIF responded to the call and drove by to pick it up. He took it to his office in a town called Marion to feed it and then transported it to Virginia Wildlife Center in Waynesboro.

“They care for it there,” Bill told the Herald Courier. “We keep female bears with (radio) collars on for this very purpose — to foster orphan cubs.”

With the radio collars, officials were able to locate two bear dens that had mothers caring for cubs in them. The expert’s strategy is to go to the area and listen for cubs making noise in their den and then leave the orphan cub outside of the den. They say the mothering instincts of the bear will kick in and she will usually adopt and raise the cub as her own.

Bill said that bears usually mate in June and July and have their cubs in January and February. The baby bear was only about 2 or 3 weeks old and weighed a little over one pound, but was smart, aware and vocal. As for now, they will watch over it and bottle feed it until it’s ready to be reintroduced back into the wild.