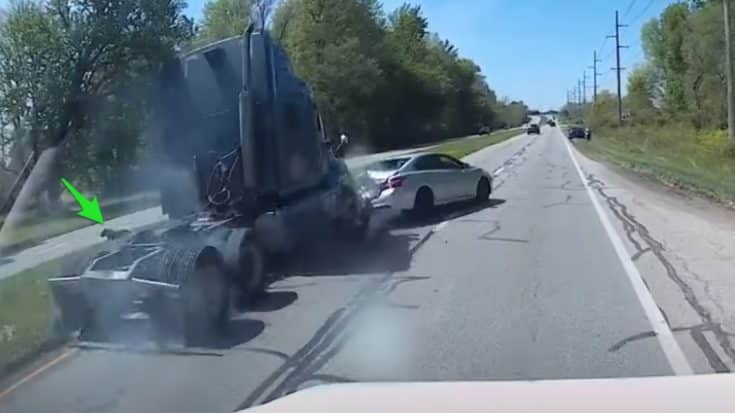 A wild video that surfaced on YouTube shows the crazy moment a car slammed on the brakes to keep from hitting a dog, causing a semi truck to then crash into the back of that car.

According to the video, the footage was captured in Lousiville, Kentucky, and captured on camera by a dashcam service called Nexar.

“Nexar records your drives, backs up important videos to the cloud and provides immediate evidence to your phone in case of an accident,” Nexar wrote on their website.

The video showed a dog running across the grass median in an attempt to cross a highway that had heavy and high-speed traffic. The car slammed on its brakes to not hit the dog that looked like it was about to try to run across the road.

Unfortunately, the car had two massive 18-wheeler trucks behind it and they were traveling at a speed that was too fast to stop. The truck in the left lane smashed into the back of the car with a force that shoved it 100ft off to the side of the road.

The truck in the right lane recorded everything and the footage was uploaded to the YouTube channel Captured With Nexar. You can watch the wild and crazy footage in the video below.