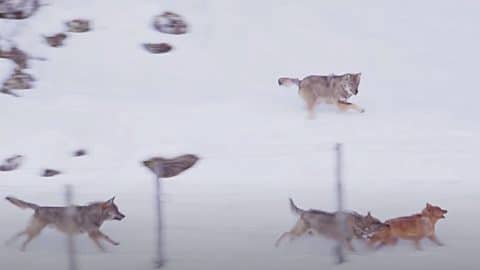 Wildlife photographer Pablo Forconi filmed some incredible footage in Abruzzo, Italy of a dog defending itself from three wolves killing a farmer’s chickens.

The video starts off zoomed in on one of the wolves as it takes off running down a hill to join two others in its pack to gang up on a dog. The dog was moving along a fence line and turned around to stand its ground when the wolves approached it.

The cunning and calculated creatures had blood on their mouths and proceeded to take the pup on a terrifying chase along the fence line. The alpha of the pack chased the dog from behind while the other two wolves ran alongside them away from the fence to block their prey from any escape.

The alpha wolf bit the dog on the back left leg and the butt before it was able to jump up and escape through an opening in the fence. According to Pablo, it was because the wolves were young and inexperienced that the dog got away.

“3 young wolves, less than a year old, trying to prey on a small dog, biting it twice,” Paublo said, according to Whisky Riff. “Their lack of experience and the low power of the bite have been to the advantage of the dog that this time managed to escape by jumping into a hole in the fence.”

After that, the farmer was able to get out there and help defend his loyal dog. The wolves only killed one chicken due to the dog’s frontline defense.

Watch Dog Escapes 3 Wolves In The Video Below