By Manly Bryant on April 18, 2019
Advertisement 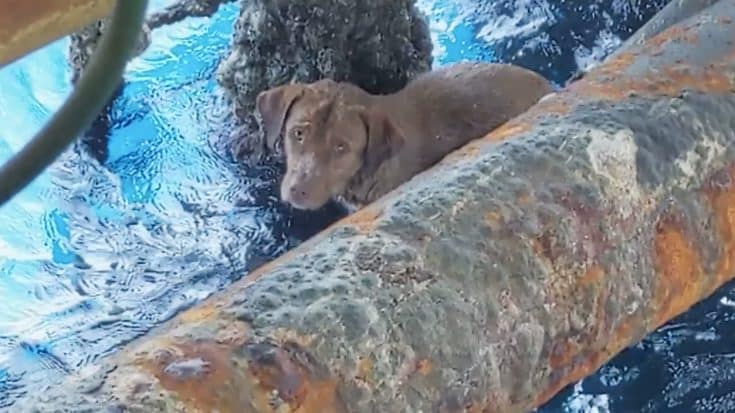 Dehydrated, fatigued and lost at sea, a small dog named Boonrod was found swimming 136 miles off the coast of Thailand near an oil rig. The oil rig workers seen her doggy-paddling towards them before she quickly took refuge on some rusty metal bars underneath the rig.

No one knows exactly how the dog even got all the way out there or how long she’d been swimming, but the workers didn’t waste any time grabbing some rope and pulling Boonrod onto the dry deck. They brought her some water, food and even created a chain by welding some metal together. She spent two full nights there.

Afterwards she was safely transferred by crane to another oil ship that came through for its oil pick up. The ship then took her to a veterinarian in Songkhla, Southern Thailand. But before she left the oil rig, the worker who saved the dog, Khon Vitisak, offered to adopt the pup if the owner didn’t claim her.

“After it made it onto the bars below the rig it didn’t cry or bark at all. We looked for a way to help her and in the end, decided to use the rope to tie around her body to lift her up. When we first took it onboard, it was depressed and tired from being in the water for a long time. It had lost body fluid. The symptoms improved after getting water and minerals.”

Back to dry land

Boonrod finally made it back to Thailand to be checked by other vets and was eventually delivered to the animal charity called Watchdog Thailand. Not only was this a happy ending but it was all captured on camera by professional photographer, Vistisak Payalaw.