By Manly Bryant on August 6, 2019
Advertisement 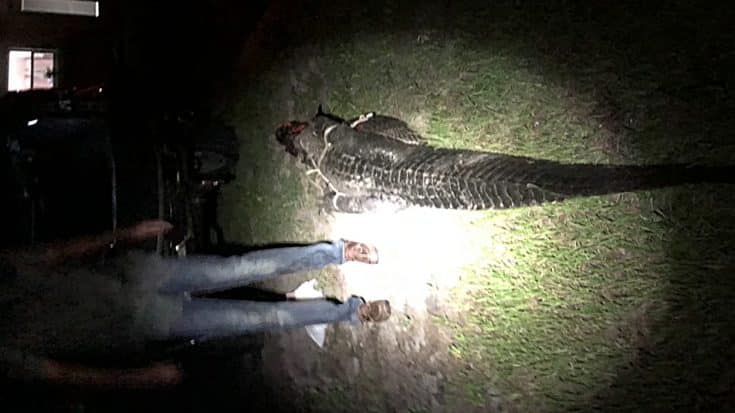 Man Jumps Into Water To Save Dog

You’ve probably heard the quote “dog is man’s best friend” right? Well, this statement couldn’t be truer for a Florida man who saw his dog getting attacked by an alligator and he jumped into the water to save it.

The story begins when a man heard his chocolate lab in the backyard barking and tussling around with something. When he went outside to check out what was going on he noticed a nine-foot alligator had his precious pup in its mouth!

Like any good father or friend, he didn’t hesitate for one second and reportedly jumped right into the canal with his labrador and the gator. With his bare hands, he grabbed the gator by the mouth and fought to pry his mouth open.

Strongest Bite In The Animal Kingdom

Alligators are known to have the strongest bite in the animal kingdom but somehow the man was able to pry the gators mouth open enough to release his dog from its grip. After his dog was freed he got it to shore and got himself out the water before the gator could do any more damage. Both the dog and the man received minor injuries.

Kelley Ann Ayers took the picture above of the alligator in the water beside her dock right before the attack happened. She lives a few doors down from the man and after she heard about the attack she posted the picture to Facebook and had a few words to say about it.

“So last Sunday when I came in from boating there was a huge gator just off my dock … this is the time of year the gators end up in the salt water! So I had a fence built on Monday along the shore….I called the gator Hotline…. but before the Trapper could get here… it attacked a dog 4 doors down and the owner Justin jumped in and saved the dog! Remarkably they are both ok! This is the photo I took last Sunday! It was huge! Rick Adams from Suncoast 7 interviewed me … I think I’m going to be on the 11pm news.”

Watch The Interview Of The Incident Below

Florida Wildlife Commission has captured the nine-foot, nine-inch alligator that bit a man and his dog in Nokomis on yesterday. Read more in the article here: https://www.mysuncoast.com/2019/08/03/authorities-capture-gator-that-bit-man-his-dog/