Dog Gets Shocked By Electric Fence & Donkey Laughs At Him

By Manly Bryant on May 5, 2021
Advertisement 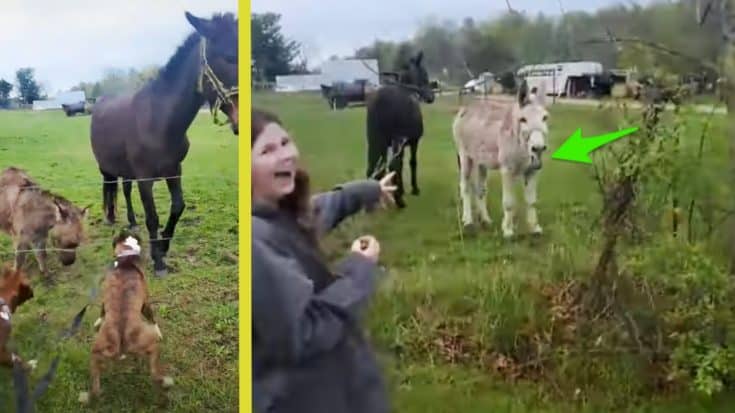 A super hilarious video was uploaded to TikTok on Tuesday of a donkey laughing at a dog that got shocked after it got a little too close to an electric fence.

Nash Rose shared the video on TikTok with a caption that read, “Poor Izzy got shocked…and the Donkey laughed at her.”

The footage showed two girls walking with two boxer dogs on leashes and stopping by an electric fence to say hello to a few farm animals on the other side waiting for them.

The boxers cautiously tried to get as close as they could get to the animals without touching the fence, however, one of the boxers ended up making direct contact with it.

It looked like the dog touched the fence with his nose and we can only imagine the shock he must have felt. He jumped, yelped, and scrambled on his feet as he took off running so fast that he broke out of his leash.

The donkey saw everything from beginning to end and knew exactly what happened to the young boxer pup. Its jaw dropped and he let out a big “hee-haw” as it laughed.

The donkey’s laugh was so loud, long, and hilarious, the girls couldn’t help but laugh too with the farm animal. We can imagine the boxer was probably alright but definitely learned a valuable new lesson about electric fences. Go ahead now and check out the video footage below.