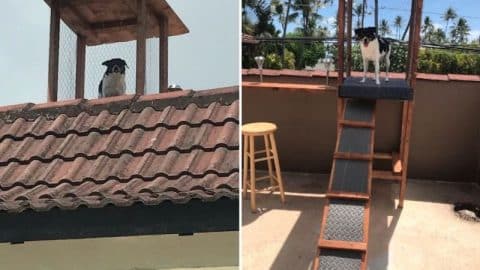 Meet Check, a 9-year-old Chihuahua-miniature pinscher who loves keeping an eye on his family and their property.

Check’s owners moved to a new house in Hawaii with a large veranda on the rooftop. The dog being curious, often made his way up to the roof to keep an eye on things and look after his owners. However, due to the three-foot wall, he was not able to see what was going on outside the house.

One day his owners left him alone in the house and were surprised to receive a call from the fire department saying that the neighbors reported that the dog had ventured from the veranda to the roof and was running around.

Rather than blocking off the entire roof, the family decided to build a tailor-made watchtower for Check. Alyxah shared adorable pictures of the rooftop lookout pup on Twitter.

“My boyfriend Nic and his dad built it because they had moved into a new house with a large lanai with access to the roof,” Alyxah told Reshare Worthy. “The first day they had left their dog alone they called the fire department because he had made his way to the roof to get a better view and see where we had gone.”

Thanks to the owners’ idea, the doggie can see his owners leave and come home. He enjoys hanging out up there during the day too. The dog likes to keep an eye on strangers walking by next to the property.

As many caring dog owners, Nic and his dad came up with a great idea to have their pooch happy. Now, this rooftop lookout post is the canine’s favorite spot in the house! Watch the video about Check, who had a rooftop watch tower built for him in the video below.