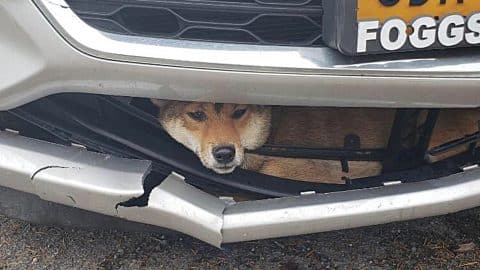 Dog Stuck In Bumper Of Car

An unidentified driver driving down the road in Schenectady, New York accidentally hit a dog and it got stuck in the bumper of her car. The crazy part though is the driver kept driving and didn’t realize the dog was there, still alive, until she stopped the car 16 miles later.

The Story Of What Happened To Coco

CBS News reported the dog’s name is Coco and she’s a Shiba Inu dog who was visiting with her owner from North Carolina when the car struck her around 11am Monday morning (Oct 28th).

For 45 minutes Coco rode deeply wedged in the bumper and the driver finally stopped after she heard noises coming from the car. She got out to see what was going on and that’s when she noticed the dog was there. She immediately called 911.

The police arrived at the scene and carefully removed Coco from the car. They then took her to Hernas Veterinary Clinic where she received medical treatment for a broken elbow and according to an interview with the owner, she’s going to require surgery that’ll costs up to $4000.

Looks at that little dog’s face! She’s got a shattered elbow & several expensive surgeries ahead of her. How you can help, tonight at 4, 5, and 6 on Channel 13. pic.twitter.com/lfTsgIRdbA

“She’s back to eating and drinking and being herself, other than running around of course. We’re just trying to minimize her activity until we can get her into the surgery room.” Coco’s owner said on CBS News.

The Vet Clinic is looking into setting up a GoFundMe page but in the meantime, they are currently accepting donations from anybody who is willing to help pay for the dog’s surgery.

Dog hit by car gets stuck in car grille

LUCKY DOG! This dog was struck by a car in New York, but the driver didn't even realize the pup was stuck IN THE GRILLE until stopping after a 45-minute drive. According to local news reports, the pup suffered a shattered elbow, but no major injuries.