By Manly Bryant on March 2, 2021
Advertisement 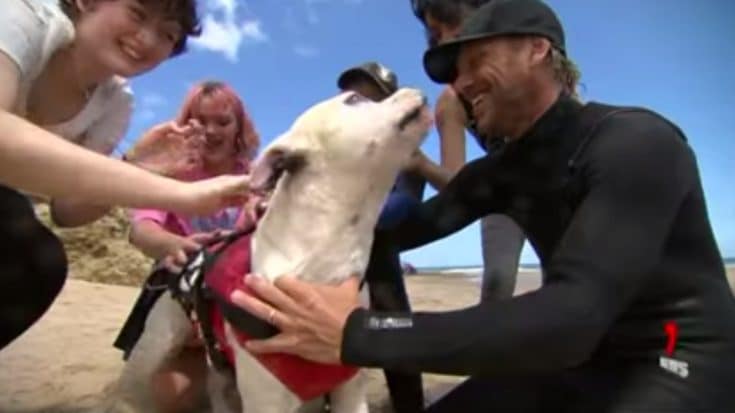 Rob Osborn and his Staffordshire bulldog Max were enjoying a day at the river in Port Noarlung, Southern Australia when they spotted a young boy drowning in the water.

Rob told 7 News, “The tide was going in and it was sucking the boy over to all of the big rocks, into a really deep part of the river over here.”

The kid had been swept away by a current and it pushed him in the deepest part of the river that was flowing towards giant rocks. Rob yelled out to his dog and pointed to the boy and without hesitation, Max jumped into the water.

Max paddled to the boy who was struggling to keep his head above water and allowed the boy to grab onto him. The dog was wearing a life jacket that had a handle the boy could grab and that kept them both afloat.

He paddled the boy back to his mother who was eagerly awaiting at the shoreline. The boy was visibly shaken up over almost drowning but overall seemed to be okay. They left before 7 News’ cameras could get there and speak with them.

7NEWS Australia reported, “Man’s best friend has become a boy’s hero, with a dog rescuing a child who nearly drowned at Port Noarlunga. Four-legged staffy x bulldog ‘Max’ swam out with a life jacket and guided the struggling swimmer back to dry land.”

Watch Footage Of Max Swimming At The River Below