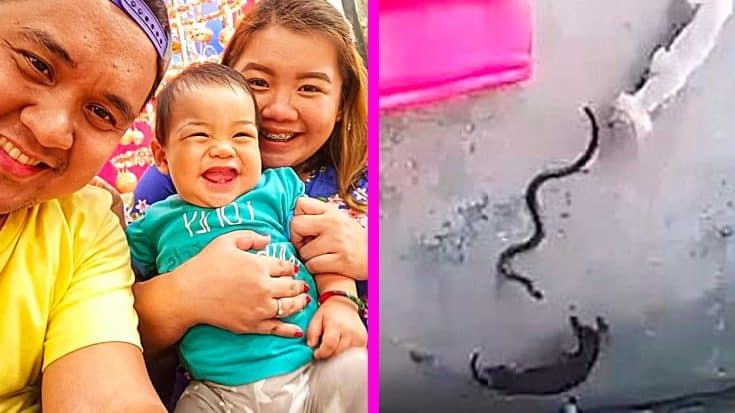 WARNING: Graphic content that may not be suitable for some viewers.

As a one-year-old baby sleeps inside a house located in the Philippines, a venomous cobra slithers under a fence onto the property and attempts to make an entrance into the home.

Two Fearless Pups To The Rescue

The snake is just a few feet from the home’s open door where the baby is sleeping when the security camera captures two brave Dachshunds confronting the cobra as it creeps under the fence. The white dog is named Moxie, and the other dog is black and named Miley.

The white pup approaches the snake first and the snake immediately spits venom into Moxie’s eyes and starts striking at her. Hearing the commotion of her Dachshund friend, the black dog Miley comes in like a hurricane charging after the snake, biting it back.

At this point, the snake realizes the major trouble it’s in and attempts to quickly slither towards the open door of the home. However, for these pups, defending their family is a top priority, especially for Miley. She goes all in, aggressively attacking the snake with the help of Moxie, biting it many times as it attempts to strike back.

The Snake Makes A Successful Bite

19 seconds into the battle you hear Miley yelp as the snake makes a successful bite, but that doesn’t stop her. She chomps down on it repeatedly and drags the cobra away from the home. They keep biting the snake so many times it eventually loses its strength to fight and dies.

This whole time the owner of the dog, Jaime Selim wasn’t even home. He and his wife Pauie Selim, were both at work while a babysitter was watching their baby. It wasn’t until they got home that the babysitter told them what happened. The babysitter also had to break the news that Miley had passed away.

Owner Is Very Proud Of His Dogs

Jamie watched the security footage and was completely stunned at what he saw. He was very sad that Miley died and that Moxie became particularly blind but was also very proud to see he had two hero dogs willing to put their life on the line to protect his baby and the babysitter.

“My wife and I were out for work. When we arrived, our helper told us what happened and reviewed the cameras. We were shocked but also so proud of the dogs.” Jamie said as he watched the video. “I can’t thank my dogs enough for protecting my baby Skye. We will miss Miley so much.”

If this story doesn’t make you tear up with mixed emotions then we don’t know what will! Thank you for your sacrifice Miley, and we’re praying that Moxie recovers quickly.

Watch The Full Video Below