Dog Says To Newborn Baby That He “Loves Him Very Much” 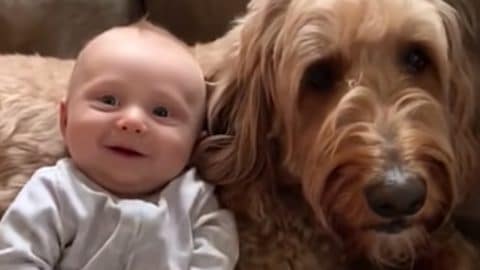 An an adorable video posted to the Rumble Viral channel on YouTube showed the moment a pet confessed his love for a newborn baby that had recently entered the home.

The video was filmed by what appears to be the baby’s mother. It showed the family dog, Ralph E. Doodles laying on the couch with her newborn baby boy Noah, who was laying with his back up against the family pet.

The dog seemed to know exactly who was laying up against him and was very careful not to make any sudden movements that could lead to tossing Noah off the couch.

Mom stood over the two with her camera in hand, filming them, and saying in a sweet voice, “I love you, Ralph, I love you, Noah.”

Noah laid there and made faces at Mom’s lovely voice, however, Ralph amazingly chimed in with Mom and began to say in his own dog voice that he loved Noah too.

“I love you” Ralph moaned in his dog voice.

She said it back to him again and Ralph continued to repeat the sweet words right back to her. It was very adorable. Watch the footage of the beautiful moment below.