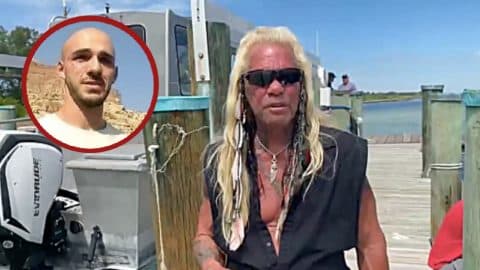 The FBI has confirmed that skeletal remains found Wednesday (October 20) belong to Brian Laundrie, a person of interest in the murder of his fiancee, Gabby Petito.

A&E reality television star of Dog the Bounty Hunter, Duane “Dog” Chapman, took part in the month-long search and spoke out Thursday evening following the confirmation that the remains found in Florida’s Carlton Reserve did, in fact, belong to Brian Laundrie.

In an exclusive statement made to In Touch Weekly, Chapman said that he believes “if the Laundrie parents had fully cooperated from the beginning, Brian Laundrie might still be alive.”

He added, “The positive ID of Brian Laundrie’s remains gives some measure of closure to this case, if not to Gabby’s family, who will likely now never know what truly happened. We are praying for Gabby’s family. As a parent who has also lost a child, I know there’s no ending to this story that brings Gabby back. But now the family can begin the process of grieving. Our thoughts are with them.”

But, Chapman believes that there may be some information hiding in Laundrie’s journal that was found near his remains on Wednesday. In an interview set to air Friday, Chapman speaks to Dr. Oz about the details he thinks the journal may contain. Chapman shared a clip of the interview to Facebook, saying that the discovery of Laundrie’s body leads to only more questions, not answers.

“I hope there’s a confession in there. I hope that the way he was about the internet, about writing everything down…I hope that he confessed,” Chapman told Dr. Oz. “And, I think that there may be kind of a suicide note there. So, I would especially like to see the last two pages of that diary.”


The murder of Gabby Petito and Brian Laundrie’s subsequent disappearance has garnered nationwide media attention over the last month. The engaged couple were traveling the country together when Petito disappeared and Laundrie returned home to Florida alone on September 1.

Petito’s family reported her missing on September 11, and roughly a week later her body was discovered in the Spread Creek Dispersed Camping Area in Wyoming’s Bridger-Teton National Forest. It was determined that the cause of her death was strangulation.

Our thoughts and prayers are with the Laundrie and Petito families.