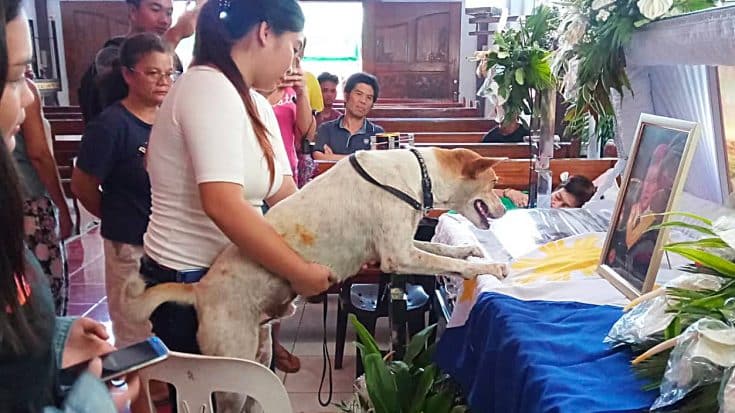 It’s said that man’s best friend is a dog. Dogs are loyal, loving and vigilantly stand beside you. They always have your back no matter what. And it appears this statement is true for professor Carmelito Marcelo, who recently passed away last Saturday (May 18th,2019).

Carmelito taught at a school in Manila and was widely adored by the community for being a great teacher. He was also known for taking care of a stray dog named Buboy. They say the dog just showed up to Carmelito’s class one day and he fed Buboy. Ever since the two bonded and Buboy continued to show up every day to hang out at Carmelito’s feet.

Waiting On A Friend

However, one day Carmelito had a major heart attack and was immediately sent to the hospital. Buboy didn’t know what happened though, he just continued to wait by the faculty room every day for Carmelito. Soon one of Carmelito’s colleagues, Ma Kristina Paola Demafelix, caught on to what Buboy was doing and felt sorry for him – she wrote on a translated Facebook post.

Kristina knew her colleague was never coming back and decided to take Buboy to the funeral so he could at least see his beloved companion one more time. The scene is heartbreaking once Buboy realized that his master was in the coffin he didn’t want to leave it.

Buboy would just sit beside the coffin and people would lift him up so he could see Carmelito. Every time Buboy would stare at him waiting for him to get up. People witnessing teared up with compassion and offered Buboy food, water and comforting rubs.

BuBoy Gets Taken Care Of

Eventually, they had to take Carmelito away to be buried and Kristina decided that although her colleague was now gone, Buboy still had a place at the school. She promised to take care of him and said Buboy would remain at the school.

“He is taking care of, the whole school and the faculty and staff, and the other students are giving him food.” Kristina wrote on Facebook.

Such a beautiful but sad story. We hope Buboy lives a long and happy life.