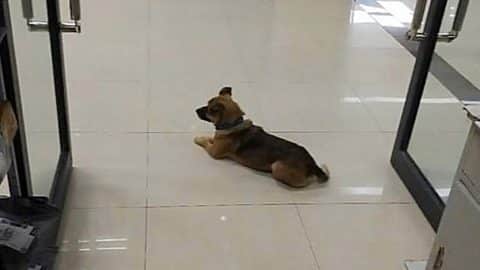 Here’s a heartbreaking story about a loyal 7-year-old dog in China who waited three long months for his owner to return to him, not knowing that he passed away from coronavirus.

According to the New York Post, the owner was an elderly man who was admitted to the Wuhan Taikang Hospital in February after contracting COVID-19. The day he walked into the hospital, he brought his dog with him who was instructed to wait outside.

Unfortunately, his owner never walked back out of the hospital. so the loyal dog patiently waited for him every single day. The staff who worked at the hospital named him Xiaobao (which means “Little Treasure”) and watched him wait every day. They eventually became heartbroken for the dog because he didn’t understand that his beloved owner wasn’t coming back and they had no way of telling him.

“Although Xiaobao can’t speak, we understand that he is definitely still looking for his owner,”New York Post reported Ms. Wu Cuifen saying, a woman who ran a market at the hospital.

Ms. Wu and other staff members at the hospital would feed him and she even tried to get him to come home with her but he refused to leave. Some tried to take him away but each day he would end up finding his way back to the hospital to wait for his owner.

The lockdown restrictions eventually lifted on April 13th and the supermarket in the hospital was able to reopen. Some patients ended up complaining about Xiaobao being there and the hospital was forced to call the Wuhan Small Animal Protection Association (WSAPA) who finally came and took him away. They medically examined him and neutered him. He’s now on the lookout for a potential new home.