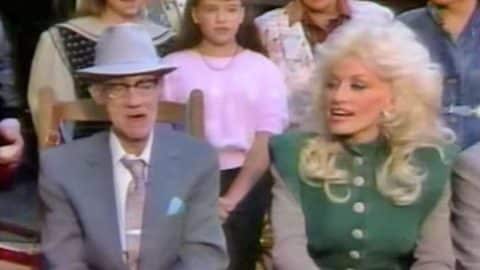 Country music legend Dolly Parton became a household name in the early 70s, undeniably establishing herself in the world of country music and entertainment. Her talent was formed at a young age when her grandfather taught her to sing. She got the chance to sing with him again, and show the world just how talented her family truly is.

In addition to her music and various film appearances, Parton was also the host of her own show for a short, but memorable, season. Titled Dolly!, the show was ultimately canceled despite incredible ratings, upon Parton asking to be released from her contract for various reasons.

Dolly has always loved the fans before anything else in show business! She is truly a lovely person! ❤️ pic.twitter.com/FS5VLN9bNS

However, during the show’s reign, Parton was able to air a very sentimental episode in light of the national holiday of Thanksgiving. Surrounded by close friends and family, Dolly is seen near what looks like a southern church house, serving as the location for a scrumptious family feast and various activities.

Parton then introduces us to her grandfather Jake, who she credits for teaching the family to sing and appreciate the gift of music. She states that her grandfather is going to treat the audience to a performance of the classic hymn “Amazing Grace,” allowing him his opening to begin the beloved tune.

Jake, with a voice that so beautifully tells a story of experience and profound wisdom, leads the family into the melody, eventually joined by Parton and the remainder of the venue. This humbling moment captures the pure essence that embodies the true purpose of Thanksgiving.

As the song reaches its end, Parton beams with pride at her loved one, followed by Jake’s gracious “Thank y’all.” The scene fades, leaving us with a humble feeling of love and family values. You can experience the wonderful clip below!